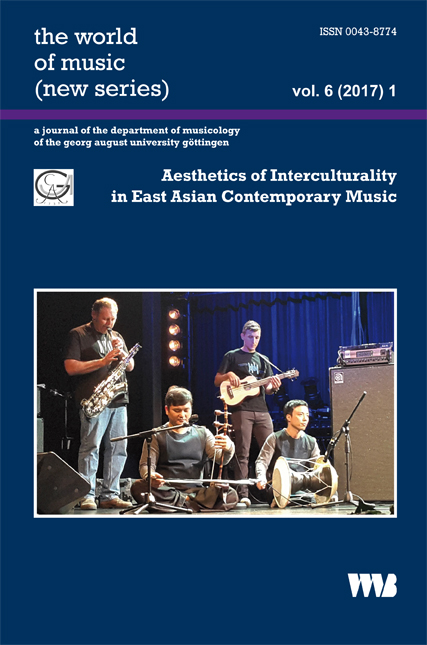 Mwenda Ntarangwi, The Street Is My Pulpit: Hip Hop and Christianity in Kenya (2016)
Simran Singh-Grewal

Denis Crowdy, Hearing the Future: The Music and Magic of the Sanguma Band (2016)
Oli Wilson

Desi Wilkinson, Call to the Dance: An Experience of the Socio-Cultural World of Traditional Breton Music and Dance (2016)
David Cooper

Charles V. Heath, The Inevitable Bandstand: The Pellicer State Band of Oaxaca and the Politics of Sound (2015)
Sergio Navarrete

Intercultural composition materialized at a time during which Euro-American social and artistic values transformed into a force of globalization. Such a force profoundly impacted on political, educational and artistic institutions in East Asia and helped shape perceptions of the relationship between the domestic and the foreign which have continued into the twenty-first century. China, Japan, Korea and Taiwan share something: a general acceptance of “Western” music as the basis of contemporary musical development and change. Perhaps the most defining element of this affinity is the “interculturality” seemingly inexorable to the very concept of contemporary composition. Despite the wholesale acceptance of European art music as “modern” music in the mid-twentieth century, artists in these East Asian countries simultane­ously acknowledge the importance of traditional music to the identity of a modern nation. Acknowledged, as well, is the somewhat marginal status these music tradi­tions have held within rapidly developing twentieth- and twenty-first-century soci­eties. Caught between the rhetoric of national representation and long-established cultural and racial power discrepancies, many East Asian composers embody a lim­inality in international composition: perennially marked by foreignness on the one hand, and labeled a vehicle for progressive national culture on the other. Insider/outsider dichotomies have remained foundational to the reception and interpretation of compositions by non-European, non-U.S.-American composers in the new millen­nium. An increasing number of composers, performers and educators have turned to the music expressivities of East Asian countries such as China, Japan, Korea and Taiwan for artistic partnerships. Thus, issues of identity, authenticity, ownership and culture have become more complicated. The articles in this issue explore constructs of interculturality in the East Asian context. By examining the particularities of na­tion, genre, musical roots and composer identity, each paper both explores and ques­tions the validity of the interculturality construct. The contributors to this issue aim to re-appropriate the notion of interculturality by exploring the nuances of East Asian compositional perspectives.

The construct of interculturality has influenced significantly the positioning of the works of non-European, non-American composers in the realm of international com­position. The common paradigm of early-twentieth-century and post-war composi­tions embraced a centeredness of the European classical art tradition around which the “rest” circulated and/or served as resources for creativity. Mid-twentieth-century Korean composers such as Sukhi Kang and Isang Yun adapted to such paradigms as they incorporated their individual stamp on the foundational power structures of post-modern composition. As time passed, and more artists from Korea were devel­oping their own paradigms of “contemporary composition” and artists outside of Korea became increasingly sensitive to pitfalls of Orientalism and appropriation, a dialogue began to form. This paper takes as its heart both the allegorical and con­crete dialogues inherent to contemporary composition engaging with the instruments, aesthetics and ideas of Korean music traditions together with those of other musical traditions. To avoid unintentionally reinserting an East/West binary in analysis, I ex­amine representative work of two artists from two very different cultural and perfor­mance contexts as well as different but overlapping time spaces: composer Tai-Bong Chun and performing artist, jazz vocalist and composer Jen Shyu. In examining the creative philosophies and creations of these artists, I focus on the authorial agency (Everett 2004:4) of the individual artist as a guide for interpretation of their work, and I emphasize the need for a shift in the assumptions underscoring the meaning of “intercultural composition.” By focusing on the personal experience of composition which draws on disparate cultural roots, the aim of this paper is to argue for the im­portance of artistic habitus—the space of possibilities wherein which creative choice materializes—in considerations of intercultural composition.

Tradition in its most general modern sense is a particularly difficult concept. Although the word’s Latin root tradere indicates an action of handing over, modern applications usually entail either a conservative value associated with responsibility and honor or opposition to everything modern and innovative. It should not be forgotten that the term tradition as translated into East Asian languages was also a modern invention, first introduced by Japanese writers who used it specifically referring to cultural heri­tage in opposition to modern, scientific ways of civilization (Japanese: 伝統 dentō; Chinese: 傳統 chuantong; Korean: 전통 chŏnt’ong). The negotiation of tradition in modern music has been a common theme of debates among composers and scholars in East Asia since the first half of the twentieth century. Such discussions, however, have rarely occurred in conjunction with parallel reflections on tradition in post-war European new music, which are no less intense than those in East Asia. This paper has been inspired by recent transnational studies of post-war avant-gardism in music and its connection with Cold War cultural politics. This paper draws on examples from post-war East Asian discussions by composers as well as scholars, in paral­lel to those documented by their contemporaneous European counterparts, including figures such as Theodor W. Adorno, Carl Dahlhaus, Rodolph Stephan, and Hermann Danuser. By re-articulating these dialogues within the context of Cold War cultural politics, this paper ponders the diverse ramifications of “tradition” in post-war new music thought. This paper re-examines this trend of thought with special caution to avoid a presumption from an East-West binary opposition, so that a more entangled web of the history, a histoire croisée can be revealed.

The discourse on the music of the first wave of post-war international Japanese com­posers (Takemitsu, Ishii, Mayuzumi) has centered around the interculturality of “East and West,” i. e. the congruence of Japanese heritage with the skilled absorption of European classical compositional craft. An inquiry into the very nature of the heri­tage defined according to the ways by which composers, both Japanese and non-Japanese, rediscovered, reconstructed, and above all reinvented “Japanese” heritage has largely been absent from this discourse. Here, I apply the critical framework of “world music history”—a musicological sub-discipline that has been developed in recent years for the purpose of re-interpreting individual music production and recep­tion as globally-entangled episodes—in order to probe into processes of re-invention against the backdrop of a post-war global search for cultural alternatives to the Eu­ropean avant-garde. One of the key figures in this process was John Cage, whose aestheticization of “Eastern” philosophies urged Japanese composers of the post-war generation to recontextualize a broad range of Japan-derived craft, from ma (silence) to gagaku ensemble writing. As a result, their music would become both avant-garde and different from that of their predecessors. I shall examine Cage’s first visit to Ja­pan in 1962 against the case study of the East-West Music Encounters in 1961, an extravaganza music festival which in many ways contributed to the construction of the “non-West” as something static, timeless, and ahistorical; thus, incompatible with the West. Critical inquiries into these two cases reveal that in the post-war global era the “culture” of “intercultural” should be subjected to reinterpretation, redefinition, and recontextualization.

In the post-World War II period, non-European aesthetics and musical structures became an important resource for European art music composition worldwide. En­sconced in the European art tradition, East Asian composition developments fused Euro-American and East Asian traditions and carried notions of projecting a national and/or local identity. The dominance of “Western” compositional ideals sprinkled with an “East Asian” flavor spurred scholars to look pessimistically upon expressions of local identity in art music production. Due to this, many scholars persistently have underestimated the influence of the local social context in the process of contempo­rary music composition. In this paper, the author considers the impact of national cultural memory on the work of mid- to late-twentieth-century East Asian compos­ers. Drawing on the assumption that society and culture determine individual and collective memory (Velicu 2011), the author investigates the ways by which pivotal twentieth-century East Asian composers conjured cultural memory through use of local musical idioms and iconic melodies. The author focuses on three major late-twentieth-century symphonic works of well-known composers from Korea, Japan and China: Isang Yun’s (1917–1995) Exemplum in Memoriam Gwangju (1981), Hoso­kawa Toshio’s (1955) Voiceless Voice in Hiroshima (2000) and Zhu Jian’er’s (1922) Symphony No. 6 (1992–1994). Each of these works meditates on a pivotal moment in each country’s respective national history. In revisiting a shared cultural memory, the composers employ sonic indices and clear structures to conjure an aesthetic of belonging. All three composers choose the symphonic form and contrast eurogenic structures and aesthetics with iconic aural imagery from local history and musical traditions. In this hybridity, the composers delve into national trauma, communi­cating a clear perspective which entangles their work into local cultural memory. Through an analysis of each symphonic work and the narratives of the composers about thei work, the author uncovers the relationship between cultural memory, tradi­tion, compositional practice and paradigms of national identity.

Interculturality is a popular concept in the world of Korean contemporary music com­position. Rather than a collection of divergent musical forms fused via composition, the term interculturality implies a groundedness integral and inseparable from the identity of the composer, as well as that of the listener. Therefore, when studying the work of contemporary Korean composers, questions regarding to what extent and in what form both personal and cultural contexts influence musical themes and forms are often relevant. In this paper, I examine the compositions of Hae-Sung Lee (*1961) in order to explore interculturality as a process of identity articulation. Like with many contemporary Korean composers, Lee’s compositional training and experience is grounded within the European art tradition and underscores her approach to com­position. At the same time, while not explicitly writing “Korean” contemporary mu­sic, her personal history and cultural background frame her perspective on composi­tional focus and aesthetics. Straddling musical worlds, Hae-Sung Lee’s awareness of her identity has always been a main concern for her, whether in a direct or indirect way. Lee disapproves of assumptions regarding a fusion of the assumed-monolithic “Korean” and “Western” musical cultures. Instead, she stresses that when musical cultures interact nuanced distinctions emerge. Lee’s perspective is one embodying a pursuit of aesthetic equality through a reciprocal interchange between musical cul­tures; something which I contend forms the heart of any intercultural music practice. In this paper, I examine bicultural orchestration and Korea-specific sociological-his­toric themes in Lee’s works in order to illustrate this perspective on interculturality. To explore Lee’s compositional perspective, the paper analyzes Mulkil (Waterway) for Violin, 2 Hae-Gums, and Cello (2000), Darem for Gayago and Violin (2001), Maruta for Orchestra (1995), Sae-ya Sae-ya for Violin and Orchestra (2003).