Memory, History and Cultural Encounters in the Atlantic: The Case of Lundu
Martha Tupinambá de Ulhôa and Luiz Costa-Lima Neto

History in the Making: An Ethnography into the Roots of Capoeira Angola
Christine Dettmann 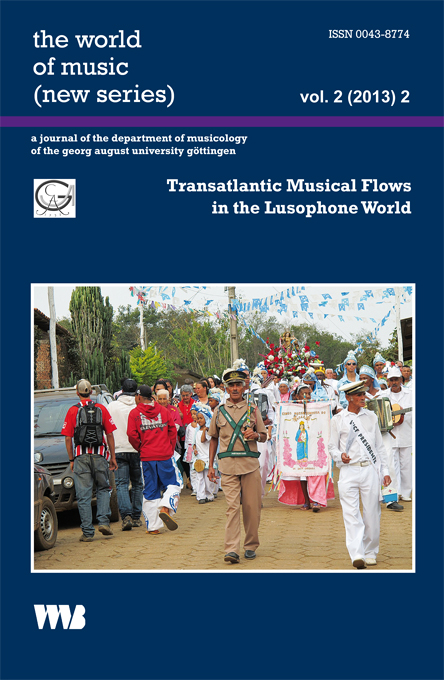 This issue revolves around musical practices of the Portuguese-speaking world in the light of postcolonialism and globalization. It looks at transatlantic cultural flows in which Portugal’s agency as a colonial and slave-trading power, as well as migration and diaspora, have played important roles. The articles analyse music, dance and performance within the complex fields of cultural and linguistic affinities and differences from which these practices emerge.  Through its focus on musical flows, the issue offers new perspectives on how musical performance works to articulate identities that depart from narratives about national culture. One of the aims of the issue is to look at tensions emerging between hegemonic forces and dynamics of identity construction in a given context; these tensions are implicated in the musical choices people make. Moreover, the issue analyses processes of knowledge-power production in the colonial setting.  Theories of memory, discourse, narrative, race and ethnicity, cultural encounters, hybridity, multiculturalism and native theory play a special role. The issue builds on and rethinks Black Atlantic theories, such as those of Gilroy (1992), Naro et al. (2007) and Vale de Almeida (2007), offering multiple and alternative readings of transatlantic flows and of cultural heritage.

David Kaminsky, Swedish Folk Music in the Twenty-First Century: On the Nature of Tradition in a Folkless Nation (2012)
Dan Bendrups

From Kuno to Kebyar: Balinese Gamelan Angklung (2010)
Elizabeth A. Clendinning

The introductory article provides insight into the Lusophone transatlantic cultural history and reflects on the benefits and limits of an application of postcolonial theory to the Lusophone case. It also introduces complex discursive and conceptual fields such as the use of ‘Lusofonia’ as a label in the contemporary music industry. Individual articles draw from the fields of ethnomusicology, historical musicology, anthropology, popular music studies, cultural history, sociology and postcolonial studies. They examine cultural flows in traditional, popular, and art music in Portugal, Brazil, Cape Verde, Angola, South Africa, the Caribbean and the US, whereby the categories of traditional/folk, popular and art are reflected upon critically in the introductory article. Musical genres on which the individual articles focus include lundu, cachucha, fado, morna, colonial art music, music for brass bands, capoeira, rap, hip-hop, reggae, semba, kizomba and kuduro.

In the 1940s the German-Uruguayan musicologist Francisco Curt Lange (1903-1997) published a preliminary report containing his finding on colonial music in the mining regions of Minas Gerais, Brazil. He noted that most of professional musicians operating in the region during the 18th century were mulattos, a phenomenon he called “musical mulatismo.” In contrast to the reigning nationalist discourses in Brazil, in which the nation was being constructed around hybridities, the mulattos in Minas engaged in locally composed liturgical repertoires in a marked European pre-Classical style. Lange’s findings, therefore, did not only call for revisions to the narratives on Brazilian Art Music, they would also require a reconceptualisation of musical mulatismo. This paper assesses these debates in light of Lange’s contributions to current understanding of the mulatto experience in Portuguese America and of how musical activities that followed the prevailing trend in Europe came to be used by them as a means of confronting the complex transatlantic encounters in the colonial setting.

Memory, History and Cultural Encounters in the Atlantic: The Case of Lundu
Martha Tupinambá de Ulhôa and Luiz Costa-Lima Neto

The construction of founding narratives of national identities makes use of a selective memory, prioritizing aspects that tend to be revised after a return to primary sources. This also applies to the lundu dance, elected as one of the fundamental pillars of the history of popular music in Brazil. Lundu (lundum, ondu, lundu) was one of many ‘’exotic’’ dances performed during theatrical performances in the late 18th century in Portugal, and in the first half of the 19th century on South American stages (Rio de Janeiro, Buenos Aires, and Lima). Foreign visitors who saw lundu performances (Debret, Rugendas, von Martius) compared it with dances they knew from Europe (Spanish fandango, German allemanda). This article revisits the interactions among Africa, the Americas, and Europe, embodied in lundu in Brazil, and allows – through a detailed study of information taken from Brazillian newspapers and musical scores of the time (1821-1850) – a questioning of the historiographical canon build around lundu.

History in the Making: An Ethnography into the Roots of Capoeira Angola
Christine Dettmann

By focusing on the history-making of the Afro-Brazilian martial art capoeira, challenges for research into the African Diaspora become apparent. By outlining the research history to date of Capoeira Angola within the academic realm of African American Studies, the contentious territory between Afrocentric and creolizationist ideas comes to the fore. Here, the agents of capoeira history-making extend far across national borders and continents, stretching beyond the boundaries of the lusophone world. This is particularly noticeable when tracing the historic trail of the Angolan combat game engolo, rumoured to be an African ancestor of Capoeira Angola and as such, since the 1970s, a powerful signifier for capoeira practitioners. My concluding remarks allude to the increasing intersection between scholars and practitioners involved in this global history-making process. It is therefore necessary to develop an ethnography sensitized to the identity politics of history-making in order to better ground and position future transatlantic research in ethnomusicology.

Bandas filarmónicas, amateur community bands, travel from the Azores, continental Portugal, and diaspora communities in North America to participate in the annual Great Feast of the Divine Holy Spirit of New England in Fall River, Massachusetts. In this essay, I place bandas filarmónicas in a broader context of musical development in Portugal, its former colonies, and diaspora communities. Drawing on ethnographic research with Portuguese and Portuguese-American ensembles at the Great Feast, I explore how and why bandas filarmónicas have become iconic of Portuguese identity among diaspora populations and widespread in lusophone countries, but fall outside the discourse of lusofonia.

In the context of today’s symbolic economy, where cities and states compete in order to gain visibility in the market of global culture, the city of Lisbon has asserted itself as a centre and space for a unique musical fusion among Portuguese-speaking countries. This article discusses the emergence of a “musical lusophonia” that can be observed in various music and culture manifestations such as the festivals Lisboa Que Amanhece, Conexão Lusófona, MusiDanças, Lisboa Mistura, and Festival Todos. For most of the organizers of these events, the 2006 documentary “Lusofonia: a (R)Evolução” produced by the multinational Red Bull Music Academy was paramount in the (re-)definition of Lisbon as a center for a unique musical fusion in the Lusophone world and remains influential in their respective attempts to promote this idea. Transversal to the various narratives collected herein are three interrelated arguments: 1. the fusion of various Lusophone musical styles has long been a feature in Lisbon; 2. this fact has never been fully acknowledged and remains greatly invisible to most people including locals and tourists; and 3. official support is required in order for this musical fusion to gain the visibility it warrants. As it seems, the emergence of the idea of a “musical lusophonia” serves to fill the gap in representation and promote Lisbon on the stage of global culture. This paper addresses some of the questions about “musical lusophonia” with respect to the variety of culture and style represented in Lisbon’s music scenes – through fado, African, Brazilian, and world musics essentially – as they also produce competing images of the city, within or without the lusophone narrative lines. Finally, the paper discusses the ambiguities of the idea of “musical lusophonia” and its potentially dubious connotations in the post-colonial context, as Lisbon was also the capital of the Portuguese colonial empire.