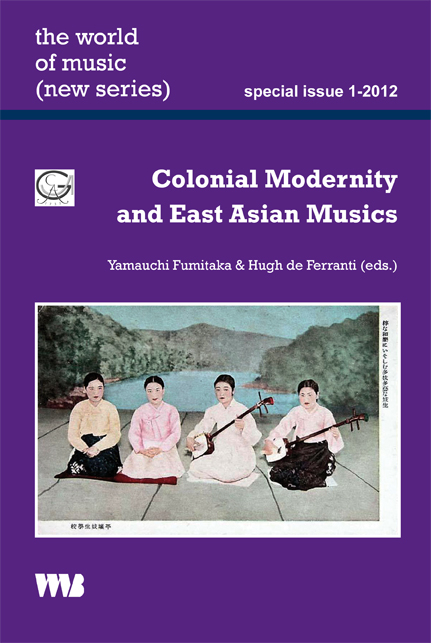 This special issue includes contributions by prominent music researchers based in China, Japan, Taiwan, and Australia. One of the first attempts to present scholarly work on music in colonial era East Asia in a thematically coordinated manner, the issue delineates diverse experiences of colonialism and modernity among musicians in Korea, Taiwan, Japanese-occupied Shanghai, and naichi or ‘home islands’ Japan. A study of musical interface between French colonists and Vietnamese in prewar Hanoi offers a comparative perspective on music and colonial modernity in what had formerly been part of the cultural Sinosphere. 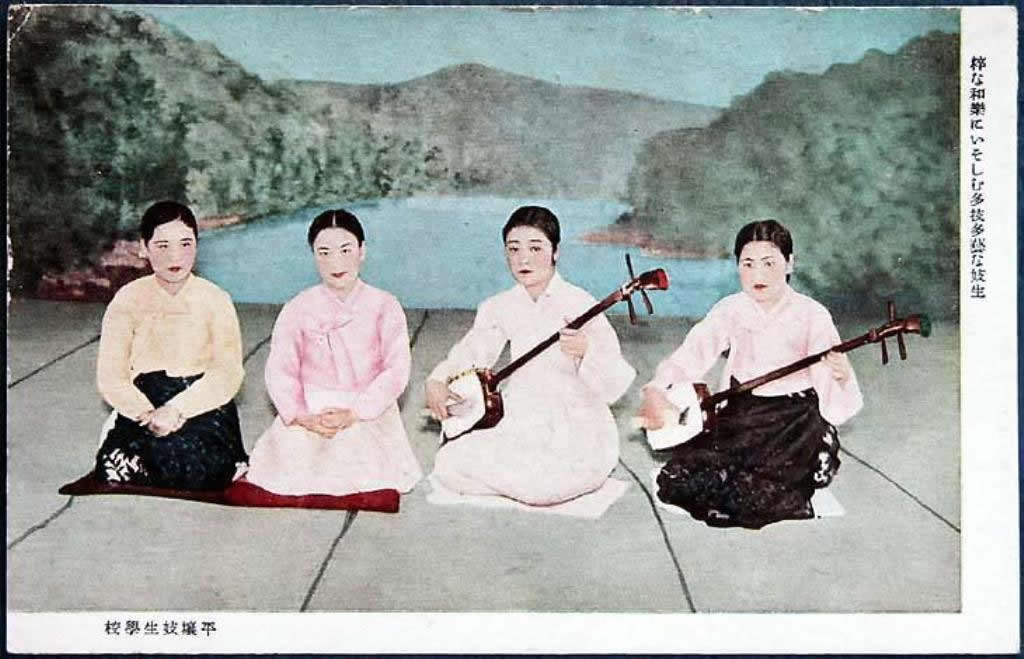 This photo was probably taken during musicologist Tanabe Hisao’s first visit to the kisaeng school in Pyongyang in 1921, while on his first trip to Korea. The same photo was reprinted in black and white in Tanabe’s fieldnotes (中国・朝鮮音楽調査紀行, 音楽之友社, 1975, p.91). The fieldnotes were first published in “音楽と蓄音器” (Music and the Phonograph), Vol. 8, No. 5 (May, 1921), Special Issue: Korean Music.

Contemplating colonialism in East Asia might call for a plural, historical approach to the notion and thus start by taking into critical consideration the region’s prolonged history of Chinese hegemonic presence, which led to the construction of what is often called the Chinese cultural sphere or ‘Sinosphere.’ With the adoption of a late nineteenth and early twentieth century timeframe, however, and a thematic concern for modernity, Japanese colonialism, in preference to Chinese or Western colonialisms, becomes the main focus of research. In places such as the Korean peninsula in particular, Japanese colonialism was most keenly enforced and experienced in its singularity. Accordingly, scholars of Korean history in both Korea and Japan have long found it extremely difficult to reconcile modernity, which was once conceptualized as a condition of ‘progress’ that had originated in the West, with its particular forms of colonial domination. At the same time, they have developed their own critical thinking about complicated interrelations between colonialism and modernity. This introductory article thus will begin by presenting a critical review of recent developments in theorisation and application of the concept of ‘colonial modernity’ in Japanese and Korean scholarship. It will then summarise the main arms of extant research on colonialism in modern East Asian music history, before introducing the themes and concerns of the five articles in this special issue.

In brief, the issue’s unifying thematic strand is the musical manifestation of a ‘remediation’ of imperial-colonial relations across East Asia following the ‘demediation’ of traditional associations under the Sinospheric cultural order. This was brought about by a Japan-centric imperial order that had construed and structured modern musical life and its enabling institutions across the empire – music in general education, musical training, conditions for performing and composing as modern professions, and the recording industry – only through situating itself within Western musical hegemony. Individual papers give emphasis to the position of traditional musics in the colonies, the empire-wide ‘economy’ of specialists in Western music, the complexity of suzerain-colony junctures articulated through the practices of the recording industry, the agency of colonised musician-bureaucrats in shaping musical life, the importance of colonialist ideology and imagery for Japanese composers who treated ‘the colonial’ as one of several tools for modernising traditional repertories, and the comparative case of musical life under French domination in 1920s Vietnam, which became exposed to Western colonialism more directly than other places in the East Asian Sinosphere.

Zhang Fuxing (1888-1954) was the first Taiwanese to receive formal training in Western music in Japan and to disseminate it in colonial Taiwan. He was also the first to document Taiwanese music and to indigenize Taiwanese pop songs. Despite this importance, hoewever, past writings mostly focused on his activities in the 1910s and 20s, and little is known about his musical thoughts and practices in the 1930s. By analyzing Zhang’s discourse and his works issued on Victor records, this paper discusses how Zhang’s attitude toward Thaiwanese music changed from the 1910s to the 1930s and how he negotiated between tradition and modernity when struggling with the complicated identity of Taiwanes music in relation to the musics of China, Japan, and the West.

The Shanghai Municipal Orchestra developed from a brass band in the 1860s into a full orchestra in the early years of the 1900s and was taken over by the Japanese military authorities during World War Two. There are many records of the involvement of Japanese musicians present in the SMO. However, this British-created and Japanese-dominated orchestra was a very curious musical alliance, with its Jewish conductors from different nations, and Austro-German, Italian and White-Russian performers, as well as visiting Japanese conductors and musicians. It was formed as an outcome of the Japanese Greater East Asian Co-prosperity Sphere for an anti-Caucasian political ideal, yet during 1945-45 its artistic essesnce, ironically, was still Western, as a Western orchestra playing Western repertory along with Western-styled Japanese musical works. In this sense, it illustrates how music that has crossed national and cultural borders can serve the purposes of race, nation and politics.

The colonial experience affords both coloniser and colonised novel sensory experiences that require interpretation. When confronting new sounds in such an environment, colonial inhabitants render them intelligible by means of categories such as “music” and “noise” that inevitably involve negotiations of power and control, generating a politics of sound. This situation typified colonial Hanoi in the first third of the twentieth century, and particularly in the 1920s, when the city’s French and Vietnamese populations underwent a series of socio-cultural transformations understood at the time to be the result of a process of modernization. The sounds of the city were heard differently, and music aquired fresh relevance as a mode of cross-cultural communication, becoming a vehicle for the expression of multiple and competing perspectives that revealed – in unexpected ways – the tensions and complexities of empire.

In prewar Japanese musical genres – most notably, the large-scale dance spectacles such as the Miyako odori, Shochiku and Takarazuka revues – there are numerous works that reference or borrow material from the music and dance traditions of the Japanese colonies and quasi-colonial territories. Early Japanese musicologists explained and interpreted the music of the colonies for the Japanese populace in the home country, and numerous composers drew upon recordings and materials about colonial music in attempts to create a modern Japanese musical idiom or to renew aspects of the Japanese musical heritage. This paper addresses ways in which sôkyoku-jiuta musicians, the founders of modern music for Japanese instruments, responded to colonial music and the broader colonial project. Contemporary scholars have examined the reliance of these pioneering figures – particularly, Tateyama Noboru and Miyagi Michio – upon Western music as a tool for compositional renewal, but have not addressed the question of the colonial Other in their compositions. The most famous of these sôkyoku-jiuta musicians, Miyagi, experienced life in colonial Korea at first hand for ten years from 1907 to 1917. While the titles and texts of several of his works clearly reference Korean imagery, none of them include what might be called musical imagery. The titles and texts, however, mirror Japan’s historical progression from an incipient nationalistic state to the status of imperial/colonial power with romanticised images of the frontier for the would-be Japanese settlers. This paper is an attempt to account for both the absence of colonial musical imagery in modern music for the koto and the contradiction posed by its presence in textual imagery. Three core ideas presented in building the argument include the problematic social status of the sôkyoku-jiuta musicians, the composers’ recreation of the self as artist, and contemporary concepts of art and the “modern”.

This essay presents a cultural study of musical connection and disconnection – more simply, (dis)connection – simultaneously articulated through manifestations of colonial modernity.The case of Japan-Korea musical relations demonstrates how an imperial recording sphere emergent in early 20th century East Asia functioned as a mediator of colonial modernity, both separating and binding together musical lives between metropole and colony. The outline follows three dimensions – socio-cultural structure, human subjects and sound objects – to examine the multiple ways in which a certain musical activity or element manifested itself as a “foreign presence” cross-culturally: the first section shows how Japanese and Korean recording cultures were distinctively constructed to condition their subjects; the following two analyze how musical connection was embodied by recording musicians (such as singers, composers and arrangers) and replayed by recorded sounds (through adaptation, appropriation and representation) respectively.

.:: Cultural and Entertainment Spaces in 1930s Seoul (Korean only)