An Ivorian Wedding in an Indiana Cornfield: “Ballet” Discourse and New Diasporic Community
Daniel B. Reed

Come to My Kwe-Kwe: African Guyanese Ritual Music and the Construction of a Secondary
Diaspora in New York City
Gillian Richards-Greaves

Ahiajioku in Chicago: Festival, Music, and the Performance of Nigerian Igbo Identity in a North American City
Austin C. Okigbo 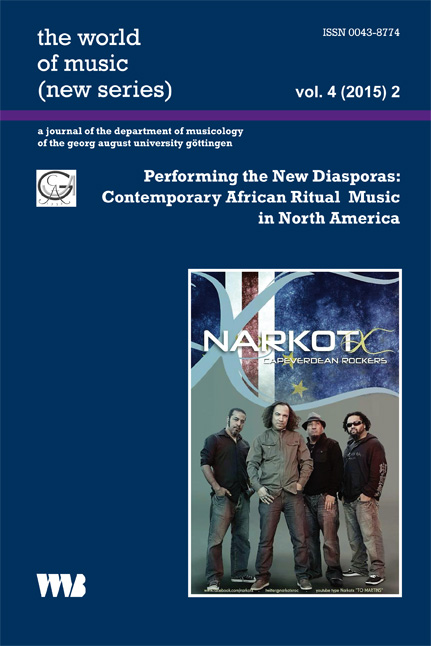 An Ivorian Wedding in an Indiana Cornfield: “Ballet” Discourse and New Diasporic Community
Daniel B. Reed

Traveling across the eastern U.S., from New York to New Orleans, Ivorian immigrant musicians and dancers gathered in 2008 for the marriage of an Ivorian man and an Indiana woman at a remote farm in west central Indiana. Veterans of Cote d’Ivoire’s national performance troupe and/or related private ensembles, these artists performed repertoire they identify as “ballet,” referencing the Ivorian version of the transnational genre of the national ensemble. More than a genre of performance with its constituent parts, “ballet” is best understood as discourse. Simultaneously post-ethnic and interethnic, nationalist and transnational, “ballet” reifies ethnic and national boundaries even as it blurs and blends them, and fuency in the language of ballet unites Ivorians across national boundaries. Both discursive and community boundaries are continually renegotiated through Ivorian immigrant performance, which operates as a fluid, adaptable arena in which seemingly incompatible ideas can be simultaneously expressed.

At St. Mark Coptic Orthodox Church in Englewood, Colorado, the community utilizes its liturgical performance to express its spirituality and negotiate its Egyptian-Coptic identity. It sustains this identity by creating a cantillation school, in which the American-born youth, who are largely not fuent in Arabic or Coptic, are educated in the music and culture of the tradition. The adaptation of English to Coptic hymnody and the ability to participate in the celebration enable the youth to maintain and express a complex identity, rooted in their parentss Egyptian Coptic heritage and their own American experience. Relying on ethnographic study with the group, this article argues that St. Markss cantillation school exemplifies the sociocultural process of reinterpreting Egyptian, Coptic, and American cultural forms to construct a trans­national religious identity. It suggests that St. Markss Coptic community comprises a relevant example of Ingrid Monsonss (2000:12) discourse on new approaches to studying African diaspora by “examining the social and cultural processes through which contemporary Africans revise and reinvent notions of cultural legitimacy from generation to generation.”

Drawn from the island nation and former Portuguese colony, creole Cape Verdeans are primarily the descendants of Portuguese and enslaved West Africans. Cape Verde migration to North America is linked to the New England whaling industry, which began in the eighteenth century. Found mostly in New Bedford, Boston, and Brockton, Massachusetts, and Pawtucket, Rhode Island, Cape Verdeans now live and work alongside immigrants from mainland Africa, the Caribbean, Latin America, and Brazil, thus facilitating cultural exchanges including music. Cape Verdeans have their own musical traditions, but they are open to sounds around them, incorporating them into their styles while contributing to established US styles. This article, based on extensive fieldwork, explores how they creatively incorporate ideas from their US neighbors into their own music and dance styles. Their transnational, multiracial identity is fexible and secure enough for them to sample from numerous musical sources while remaining quintessentially Cape Verdean-a people that exist in between cultural and racial boundaries.

Come to My Kwe-Kwe: African Guyanese Ritual Music and the Construction of a Secondary
Diaspora in New York City
Gillian Richards-Greaves

Guyanese of African descent celebrate a pre-wedding ritual called kweh-kweh. On the eve of a wedding ceremony, friends of the bride and groom, called their nation, come together to provide matrimonial instruction to the soon-to-be married couple and comment on their respective nations through singing, dancing, proverbial speech, and other ritual performances. Since 2005 African Guyanese in New York City have been celebrating a reenactment of the traditional” (wedding-based) kweh-kweh at an event called Come to My Kwe-Kwe, held on the Friday before Labor Day. In this essay, I examine the ways that African-Guyanese-Americans, a diasporass diaspora, draw on music at Come to My Kwe-Kwe to negotiate ethnic identities. I speciJcally explore the ways that Come to My Kwe-Kwe music enables members of the African Guyanese community to transcend their imagined community and gel as a new and tangible nation.

Ahiajioku in Chicago: Festival, Music, and the Performance of Nigerian Igbo Identity in a North American City
Austin C. Okigbo

Drawing from four years of active participation and documentation from a scholarly perspective, this essay centers on the Nigerian Igbo community’s use of music and dance in the context of the New Yam Festival to mediate a new sense of space as a culturally distinct group in the North American city of Chicago. The ahiajioku festival is based on an ancient ritual in southeastern Nigeria that celebrates community and wealth acquired through hard work, accentuated with dance music and masquerade performances. I argue in this essay that the Nigerian-American community is engaging in the politics of race that emphasizes a narrow boundary of racial and cultural affilliation that disrupts Anthony Kwame Appiah’s discourse on the notion of Africa that is defined, not by geography, but along the lines of skin color (1992). In doing so, I suggest that contemporary race discourses account for the ways in which the new African diasporas are negotiating boundaries of race and ethnicity by constructing new and seemingly isolated identities within the larger North American black community, often publicly imagined as homogeneous.

The Kutandara Center at Boulder, Colorado, is an educational institution dedicated to teaching and performing Zimbabwean marimba and mbira music. It carries on the process of diffusion of Zimbabwean music in the United States that began with Zimbabwean teacher Dumisani Maraire at the University of Washington in 1968. Considering the music and teaching methods of the Kutandara Center as examples of transculturation, this article aims to identify the nature of the transformations that have occurred between the original Zimbabwean musical culture and how it currently exists in Boulder, Colorado. By doing so, it seeks to question how we might characterize Kutandara’s pedagogical approach and the music that is generated therein. I suggest that while the center attempts to maintain a noble and tenable link with the school’s Zimbabwean roots, the participants cannot escape their American cultural roots, thus resulting in a form of cultural (musical) hybridity, which has been noted as an important aspect of the diasporic process.