“One of the Richest and Most Refined Forms of Art in the World.” Alain Daniélou, the IICMSD Archive, and Indian Music
Linda Cimardi 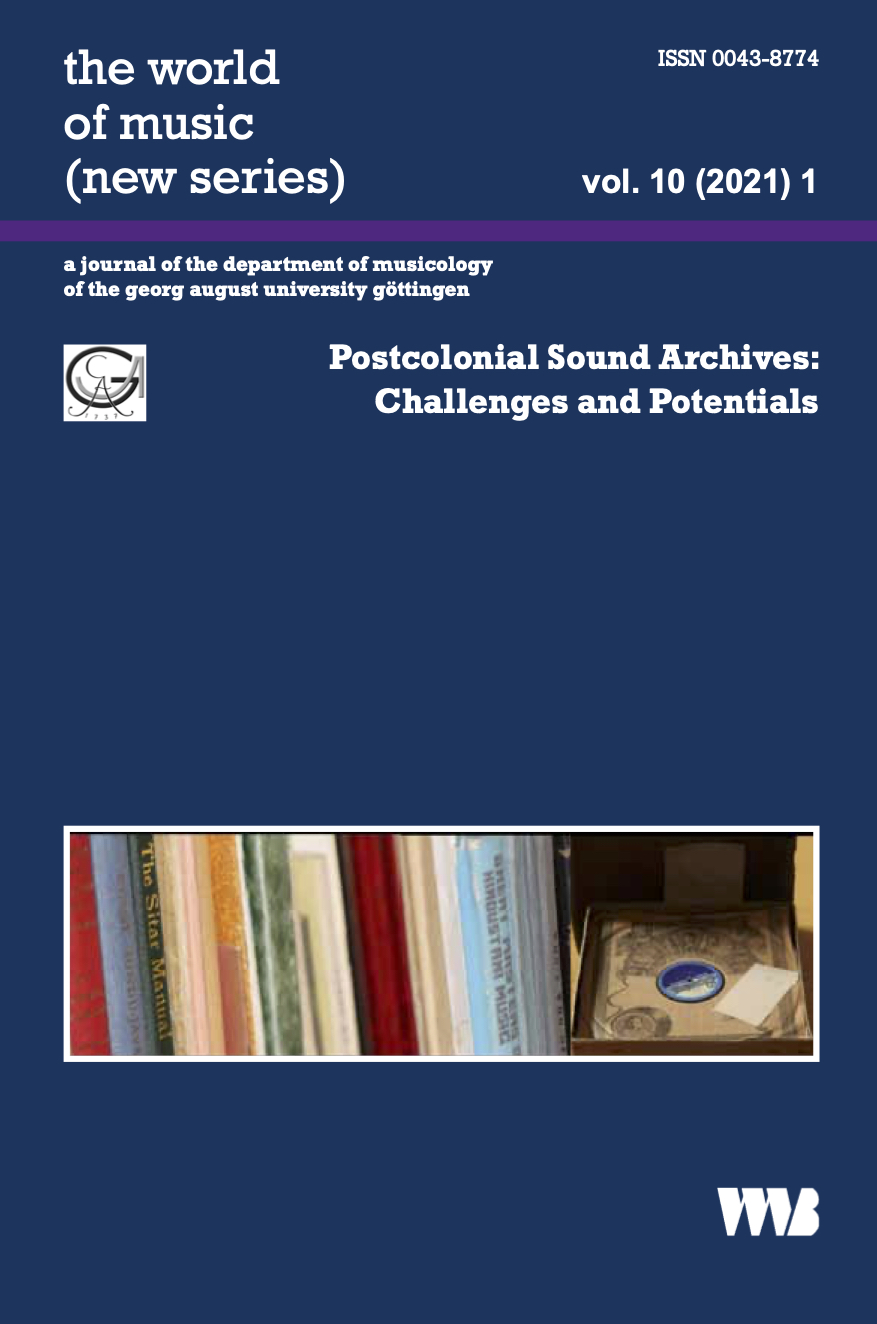 Potentials and Challenges of Repatriation: The Case of Archives and Research Centre for Ethnomusicology, India
Shubha Chaudhuri

This interview with Dutch collector Felix van Lamsweerde is based on our digital and in-person correspondence between 2017 and 2020. During this time, my work on the Felix van Lamsweerde collection comprised of an examination of the broader scope of the collection, its organisation/categorisation and how it embodies postcolonial cultural politics of India. Meeting and interacting with Felix van Lamsweerde to learn about his journey and role in creating this rich eclectic collection has been a pleasant experience, and the following interview reflects a number of aspects central to our exchange. It focuses on his interest in expressive cultures of India, his field trips to India, his work at the Tropenmuseum Amsterdam and his role as a music connoisseur, collector and impresario in the Netherlands . By establishing van Lam- sweerde’s connections with other collectors and archives of Indian expressive cultures, this interview also attempts to historicise sound collections in and of modern India. It also throws light on the early years in which the field of ethnomusicology was institutionalised in western Europe, and its diffusion in other parts of the world. In addition, it highlights the complexities of India’s nationalist cultural politics and colonial modernity as shaped by expressive cultures. The interview finally addresses the varied interpretive potentials of sound archives, and the van Lamsweerde collection in particular: their past, present and futures from the perspectives shared by a collector himself.

This double-authored article addresses colonial entanglements in the scholarly con- struction, employment and investigation of sound archives with particular attention for the aural encounters that such recorded bodies of knowledge engender. Outlining their academic, epistemic and personal positionalities, meLê yamomo and Barbara Titus engage in a written dialogue that foregrounds the (equally colonially informed) entanglements of their collective and individual thought during their ongoing collab- oration in investigating sound archives. Titus provides a funnel for the foregrounding of audible colonial entanglements by analysing the recordings of a Timorese natoni ritual in the early 20th century, by missionary Pieter Middelkoop. These recordings ended up in the Jaap Kunst Collection, now located at the University of Amsterdam under Titus’s curation. In her analysis, Titus attempts to reach beyond the agencies of Middelkoop, Kunst and herself as a curator in the formation of sound archival knowledge. This attempt succeeds only to a very limited extent. yamomo dwells on the wider epistemological implications of such attempts by addressing his own archival research as well as the Sonic Entanglements Tour he organised with scholars from Southeast Asia along formative colonial sound archives in Europe in 2019.

“One of the Richest and Most Refined Forms of Art in the World.” Alain Daniélou, the IICMSD Archive, and Indian Music
Linda Cimardi

As the first director of the International Institute for Comparative Music Studies and Documentation (IICMSD), Alain Daniélou edited the UNESCO Collection and published widely on musics from around the world. Most of the material used for these publications is today preserved at the Department of Media of the Ethnological Mu- seum in Berlin. In this article, I discuss Daniélou’s role in relation to the IICMSD archive and Indian music. I re-contextualise and re-evaluate the French musicologist’s work and his stances on different musics by critically examining how this archival collection was assembled and later scattered among various institutions through different figures working at the institute. I do this particularly by analysing the institute’s classification system and investigating Daniélou’s actual role in making the UNESCO records on Indian music.

Potentials and Challenges of Repatriation: The Case of Archives and Research Centre for Ethnomusicology, India
Shubha Chaudhuri

The Archives and Research Centre for Ethnomusicology was established in 1982 as a part of the American Institute of Indian Studies in India, in an initiative led by Nazir Jairazbhoy. The archive was established with the primary aim of creating an archival repository in India where foreign scholars could deposit their recordings, and bring to India collections of Indian music and related traditions held in archives outside India. Jairazbhoy was very passionate about the need for what we now call “repatriation.” ARCE has followed the basic objectives and continues to encourage scholars to deposit their collections and works actively to repatriate collections. However, as our definitions of archiving and repatriation change, projects that ARCE has embarked on have moved it being an archive for scholarly use to one that works to support com- munity access and archiving.

Marathi sangeet natak (literally, Marathi musical play) is an elite musical theatre genre from the Marathi-speaking western region of India. The narrative development in Marathi sangeet natak advances through songs based on Hindustani music performed by actors with live musical accompaniment. Having emerged in mid-19th-century British India, this genre became a significant marker of the newly emerging urban middle-classes of the time. While plays traversed mythological, reformist, so- cial and political themes (both, regressive and progressive) over decades, this chapter presents Marathi sangeet natak as a genre that ratified right-wing Hindu nationalist politics: the dominant cultural trajectory in the region till date. This paper draws on audio-visual material on sangeet natak in the Felix van Lamsweerde collection (particularly, a performance from 1999 in Amsterdam) to look at the reasons why Marathi sangeet natak went on to represent a world musical theatre tradition, thereby securing its place in a postcolonial sound archive of India. Through a historical analysis, then, this paper sheds light on the landscape of Marathi theatre at large while analysing the caste, class and gender dynamics that shaped the culture spheres in this region. It ultimately contextualises Marathi sangeet natak and its varied manifestations today given the upsurge of right-wing autocratic political forces.

Collected by white male Dutch scholar, curator, and impresario Felix van Lams- weerde in his archive of “Indian music and dance,” my examining selected objects from this archive has three connected goals. First, I use analytical vignettes to mark several building blocks of “white innocence” (Wekker 2016) as an imperial continuity within this archive. Second, flagging my own whiteness in my encounter with these objects, I analyse how this affects how I—as a white person—relate to its contents. Based on this, I argue that the analysed components function as constituents, convivially maintaining elements of music studies’ imperial past in the present. The case study is illustrative of how audio-visual archives feed off of what I call the “cultural archive” (Said 1993) of music studies and vice versa, unveiling mechanisms at work in the highly problematic continued upholding of whiteness as central to dominant ways of thinking, knowing, listening, and feeling within the field.