Who’s Got the Map? Scholarship, Journalism and Essentialism in Writing on South African Jazz
Gwen Ansell 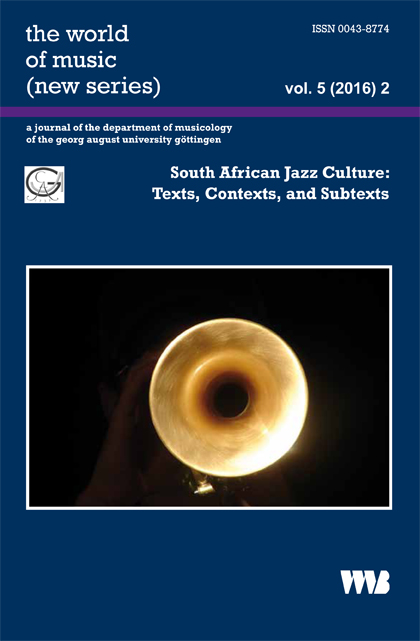 Ed Pavlić, Who Can Afford to Improvise? James Baldwin and Black Music, the Lyric and the Listeners (2016)
Charissa Granger

Tell the Truth!: Blues and Gospel by Richard Williams. Produced by the State Library and Archives of Florida (2016)
Robert Fry

Where the Palm Trees Shake At Night: Blues Music From the Florida Folklife Collection. Produced by the State Library and Archives of Florida (2010)
Robert Fry

This essay reviews a range of scholarly writings about South African jazz that have appeared as monographs, journal articles, and postgraduate dissertations over the past three decades. It identifies two main streams of research that are respectively contextual or textual in their focus: firstly, social histories of South African jazz cul­ture and/or biographies of particular musicians that consider their lives in the light of these histories; secondly, close musical analyses of particular styles, compositions, and recorded improvisations, and literary analyses of journalistic and creative writ­ings about South African jazz culture. It explains how the essays in this volume contribute to the discursive flows within and across these streams by explicitly and/or implicitly calling for a broadening, deepening, or redirecting of existing channels of inquiry.

In many parts of the world, the saxophone is symbolic of jazz. This essay traces the de­velopment of the South African jazz alto style from the 1950s through to the late 1980s through transcription and close musical analysis of fourteen recorded solos by Kippie Moeketsi, Barney Rachabane, Robbie Jansen, Dudu Pukwana, and Ntemi Piliso. The analyses consider aspects of each player’s timbral conception (or “sound,” in jazz parlance), his distinctive melodic and rhythmic vocabulary, and his approaches to phrasing and articulation.

Shifting between diverse genres, Nachtroep, by South African composer Paul Han­mer, encompasses a unique creative space, resulting in a work that moves across a multiplicity of artistic and performance domains, that merges aspects of classical concerto structure and instrumentation with concepts derived from the baroque con­certo grosso. Inspired by the wide-ranging repertoire of night troupes (nagtroepe) parading through Cape Town’s streets during Second New Year’s Day celebrations, this work’s forward-looking design juxtaposes unusual differences such as gavotte and salsa, and romantic-styled melody with passages reminiscent of Barry White. Commissioned in 2011 by the Johannesburg International Mozart Festival, with Han­mer as the composer-in-residence, this triple concerto for violin, piano and trumpet/flugelhorn with string orchestra was premiered on 19 February 2012 in the Linder
Auditorium, Johannesburg, South Africa. With the Festival’s theme being “quasi im­provisando” Nachtroep incorporates aspects of cadenza improvisation alongside a series of notated cadenzas.

In the mid-1960s, pockets of the British jazz scene acquired a South African accent. This accent was made up of the polyglot styles that had constituted 1950s black South African popular musics. In Britain, the styles were transmitted and mediated predominantly by mbaqanga: the marabi-based South African jazz, significantly also known as African jazz. Mbaqanga’s role in British avant-garde jazz scenes has received careful attention from a small but dedicated group of scholars from both countries, whose writings tend to focus on groups like the Blue Notes or Spear and on musicians like Chris McGregor, Dudu Pukwana or Bheki Mseleku. While giving this scholarship its due, I suggest in this paper that the focus on iconic scenes, groups and musicians forms only part of the story. The dynamics of mbaqanga’s role in British jazz were in fact forged elsewhere, in scenes and by people like Gwigwi Mrwebi, who are usually considered marginal to South African jazz history.

This essay examines the ways in which Mandla Langa’s novel, A Rainbow on the Paper Sky, functions as a jazz novel. It extends the tropes that have distinguished previous well-known jazz novels such as James Weldon Johnson’s Autobiography of an Ex-Colored Man, and Ralph Ellison’s Invisible Man. As such, Rainbow is both a self-consciously Pan-African work of art and an eloquent testament to the importance of South African music and literature to the aesthetic/political field now known as the Black Atlantic. Langa’s novel uses music almost as a character in itself; more than a backdrop for the plot, music is able to instruct and inform the actions of the various protagonists. Jazz as a trope goes beyond the glorification of the musical achieve­ments of black people, and explores the strategies and needs of the culture that neces­sitated that the music assume existential importance.

In this article I attempt to bring into dialogue two bodies of research that seldom inform one another: critical attention to the contested social history of the public sphere, and management practices as conceived and implemented by those who assume leadership roles within that sphere. In the process, I demonstrate that the mounting of a jazz festival has become a kind of meta-cultural performance in its own right. Drawing on my professional experience of working in the South African festival sector, and having reviewed the extant literature that is of relevance in (re)constructing this cultural domain, I report on an interview with a former colleague, the founder of the Cape Town International Jazz Festival, and quote other contemporary sources to characterise the current situation as South Africa continues to wrestle in contexts of public jazz presentation with the racialised inequalities of its past and its present almost a quarter-century after the formal end of apartheid.

Who’s Got the Map? Scholarship, Journalism and Essentialism in Writing on South African Jazz
Gwen Ansell

This paper reviews a diverse range of writings about South African jazz, from different historical contexts, communities and professional backgrounds, to consider how South African jazz may be situated in the many places where it is written. Taking as starting-points the lacunae, silencings and concern for the delineation of difference in apartheid-era musicology (and the distinctive place occupied by the genre in South Africa’s musical landscape), it discusses the important role both creative fiction and journalism have played in contributing to current scholarly knowledge about the music. The review concludes by mapping the kinds of new writers and writings about jazz that have emerged since the 1990s. Both fresh insights, and fresh essentialisms are apparent in this new work, yet the review also notes how certain areas, such as the jazz histories of smaller towns and cities, and gender in South African jazz, remain largely un-mapped.