Music and Torture | Music and Punishment

Music and Punishment in the British Army in the Eighteenth and Nineteenth Centuries
M. J. Grant (University of Göttingen)

“Human rights have made a difference”: An interview with Manfred Nowak 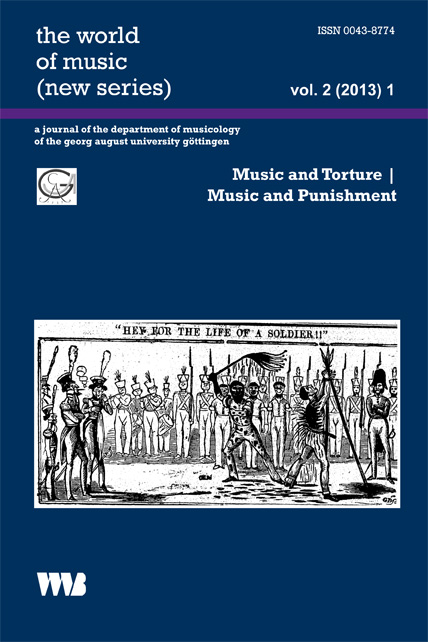 This issue addresses the subject of the use of music in connection with torture and other forms of cruel, inhuman and degrading treatment and punishment. Articles include case studies on music in the context of corporal punishment in the British armed forces in the 18th and 19th centuries, music in National Socialist concentration camps, and the use of music as a form of torture and terror in Greece and in Chile under Pinochet. The volume also raises theoretical and practical issues relating to research into music torture, and situates the discussion of music torture within the wider context of torture in the world today.

Laura Edmondson, Performance and Politics in Tanzania: The Nation on Stage (2008)
Frank Gunderson

Music and Punishment in the British Army in the Eighteenth and Nineteenth Centuries
M. J. Grant (University of Goettingen)

Until prohibited after an intensive public campaign in the mid-nineteenth century, members of the British armed forces could expect to be subjected to severe forms of corporal punishment and/or humiliating treatment, sometimes for even relatively minor offences. Such punishments were generally carried out in public, and in this way served as a warning to other soldiers. Depictions of such scenarios often show military musicians accompanying these punishment rituals; indeed, the phrase “drumming out” to describe dismissal in disgrace has its literal origins in some of these practices. What images alone do not tell us, however, is that from the later seventeenth century, it was the drummers who were charged with inflicting the most severe types of corporal punishment as well. This article will explore the origins, practical purpose and symbolic logic behind this very particular connection between military music and military discipline, which, as is so often the case with military traditions, was not limited to the British army. It will include a particular focus on the role of child military musicians in these and other disciplinary practices at this time, and will consider what such traditions may tell us about the use of music in connection with cruel, inhuman and degrading punishment in more recent times as well.

In the dense system of Nazi camps, ghettos and prisons established in occupied Polish territories after the September 1939 invasion by the Third Reich, music was present in manifold ways. Among the multiple roles it played there for the oppressors and the oppressed, one is however particularly striking and demands close examination: why was music used by the Nazis as an important element of torture and how was it intertwined with genocidal actions? What types of music were used and in which circumstances? These and other questions will be discussed and answered in the article through the analysis of testimonies of Polish-Jewish and Polish survivors of different types of camps (among others Auschwitz-Birkenau, Treblinka, Majdanek) and prisons (Pawiak prison in Warsaw). Particular cases of torture and music described in interviews with former prisoners, recently recorded by the author of the article, as well as in such important written sources as Jechiel Rajchman’s memories from Treblinka (1942-43), bring to light instances of specific uses of music as torture, treated by the Nazi functionaries as element of psychological and ethical degradation of prisoners.

On seizing power on 11 September 1973, General Augusto Pinochet established hundreds of detention centres, from the Atacama Desert to the Magellan Strait. Tens of thousands of prisoners were held in these centres, without recourse to fair trials and lacking elementary judicial guarantees. Most inmates were subjected to serious abuse through physical and psychological torture; many were killed, their bodies ‘disappeared’. Despite the regime of terror, precarious living conditions and censorship, prisoners developed diverse musical activities on their own initiative, including composition, performance and teaching. Pinochet’s agents also used music, as a soundtrack to torture with recordings played in the background, forcing prisoners to sing and inflicting punishment if the standards required were not met. Evidence of the above is fragmented and little known, and has been largely overlooked by critics. This article explores the musical landscape of three torture chambers in Santiago City: La Venda Sexy (aka La Discothéque), Villa Grimaldi and Estadio Nacional. Using personal interviews with ex inmates, it discusses the features of sonic torture and forced singing, and their impact on the affective states of victims.

The use of music and sound during detention and interrogation is an issue that has emerged strongly in recent debates on the so-called War on Terror. However, music and sound have been used extensively in the past as a weapon against political prisoners. This article will explore how the Greek military Junta that ruled Greece from 1967 to 1974 used music and sound during detention and interrogation in the prisons of Greek Military Police and the Special Interrogation Unit (EAT/ESA), and in the prisons at the island of Giaros during its first phase of operation. Documenting the infliction of traumatic violence under the dictatorship, the transcripts of the 1975 Torturers Trials paint in detail the brutality of the Greek Junta and its systematic use of torture. The use of music/sound as an instrument of terror is legible in the trials but was not given any special recognition or emphasis. Drawing on interviews with former political prisoners, the article will explore the ways in which the Greek Junta deployed music as a weapon of terror. Either heard continuously in high volume, or employed in the form of forced singing, music served as another way through which subjectivity was targeted and traumatized. The paper will also explore how the so-called ‘patriotic’ music was used in the detention camp of Giaros under the pretext of ‘re-education’. Finally, the paper will confront and discuss research problems related to the interviewing of torture victims.

“Human rights have made a difference”: An interview with Manfred Nowak
Manfred Nowak, Professor at the Ludwig Boltzmann Institute for Human Rights in Vienna, was UN Special Rapporteur for Torture from 2004-2010 and interviewed many survivors of US detention camps around the world who had been subjected to music torture. In this interview, he talks about this and reflects more generally on torture in today’s world and the role of human rights in helping to combat it.