Music in Oman: Politics, Identity, Time, and Space in the Sultanate

Prologue to the Volume
Majid Al-Harthy and Anne K. Rasmussen

On the Decks of Dhows: Musical Traditions of Oman and the Indian Ocean World
Laith Ulaby

The Musical Design of National Space and Time in Oman
Anne K. Rasmussen

African Identities, Afro-Omani Music, and the Official Constructions of a Musical Past
Majid Al Harthy 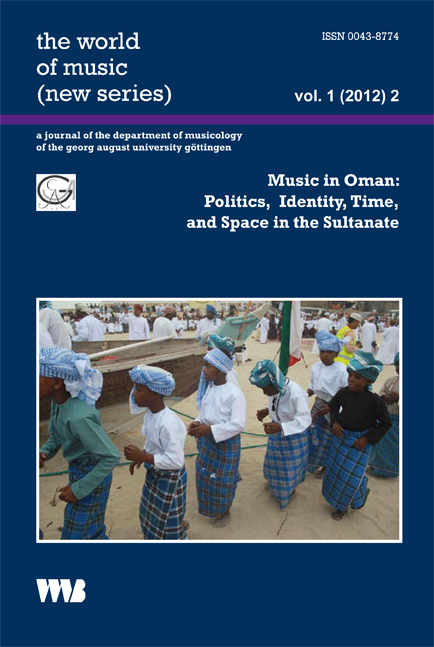 Considering the size of the country and its unique position in the Gulf and Arab world, the proactive expansion of musical life in the Sultanate of Oman
is remarkable. Aspects of a comprehensive “Renaissance” or nahda instigated by Sultan Qaboos bin Said shortly after he came to power in 1970. New contexts for musical education, performance, and connoisseurship, alongside efforts to preserve and stimulate traditions of indigenous music and dance have been enabled by the wealth of the Sultanate and the vision of its leader. Within the Sultan’s Royal Guard, a robust culture of Military music, a symphony orchestra, and ensembles for Arab and Omani traditional music and dance are nurtured, with training programs for Omani youth recruited from throughout the country who then work toward matriculation as full-fledged professional musicians. In the public sphere, music education in the schools, the new department of Musicology at Sultan Qaboos University, the ‘Ud Hobbyist Association, national festivals that showcase traditional arts, and the newly constructed Royal Oman Opera House are among the institutions that complement the “musicalization” of Oman.

For this issues of the world of music (new series), five articles complemented by a set of interviews with musicians whose stories reflect a variety of issues of interest to the ethnomusicologist, round out our collective impressions of the contemporary musical life in the Sultanate. The five authors who collaborated on his collection are each scholars involved in original ethnographic research in the Arabian Gulf. All of them have been engaged music activists working in Oman and the Gulf and each author brings specific expertise to a set of questions regarding politically motivated constructions of a musical past, the challenge of implementing music education and connoisseurship, teaching identity through framing traditional performance, and the mixed musical aesthetics of Omani popular and national musics, facilitated by Arab regional interculturalism. Together we offer perspectives on the re-creation and re-contextualization of multiethnic traditional musics, the acquisition of cultural capital in the form of European and International art musics and institutions along with the classical music of the Turko Arab tradition, and the challenges for music education, outreach, and production in the schools, universities, through mass media and in the public sphere as new contexts for music learning, performance, and consumption are created and managed. The presentation of Oman, as a contemporary multicultural society, deeply rooted in complex multi-regional traditions, yet viscerally involved in the construction of cultural identities within national, regional, post-colonial, and global frames should be of interest to students and scholars of Indian Ocean interactions, Arab societies, Middle Eastern histories, and political and cultural Islam.

Siberia: At the Centre of the World–Music, Dance and Ritual in Sakha-Yakutia and Buryatia (2008)
Robin Harris

Rabeca: A Map and Database of the Brazilian and Portuguese Rabeca and the Guarani Rawé
Susana Moreno Fernández

Prologue to the Volume
Majid Al-Harthy and Anne K. Rasmussen

Our prologue to the volume highlights the extraordinary developments in the musical life of the Sultanate of Oman, a country that in 2012 celebrates its 41st “National Day.” While the country is steeped in overlapping histories of trade and travel that are centuries old and involve innumerable players and scenes, modern musical developments in Oman may all be attributed to His Majesty Sultan Qaboos bin Said, a phenomenon that is both singular in the contemporary world and of particular interest to ethnomusicologists and scholars of music and culture. While such developments have been reported by previous publications our work collectively interprets the events, institutions, and policies of Omani music culture in light of the theoretical interests and paradigms that capture concern the contemporary student and scholar of culture. Rapid and multifaceted musical development, itself partly “natural” but also partly a result of “cultural management” produces a variety of dynamic processes and tensions that reflect, refract, predict, and narrate discourses of class and race, gender and sexuality, origin and identity, regionalism and multinationalism, and global cultural flow. The prologue also provides a frame for the following articles in the volume that foreground, historical perspectives and processes at work in the Arabian Gulf (Ulaby), local, national, and trans-regional systems of musical patronage and production (Rasmussen), Afro-Omani musics and identity politics (Al-Harthy), and the modern institutionalization of international culture (Al-Taee) we identify the ways in which Oman is a laboratory of the issues and processes that are at the heart of the anthropology of music. Four cameo appearances by professional male and female musicians, presented in their own words through recorded and transcribed interviews, (introduced by El-Shawan Castelo Branco) allow the voices of the people who do the musical work in Oman to join with those of the volume’s authors.

On the Decks of Dhows:
Musical Traditions of Oman and the Indian Ocean World
Laith Ulaby, Independent Scholar

This article situates the musical traditions of Oman in the broader context of the Arabian Peninsula and Indian Ocean. Trade, slavery, and pilgrimage prompted the creation of networks that extended across the Indian Ocean for hundreds of years and facilitated deep and lasting cultural exchanges. Oman has played an important role in these networks and this is deeply reflected in many of the local musical traditions. Since about the middle of the 20th century, countries in the Arabian Gulf (sometimes referred to as the GCC, Gulf Cooperation Council, plus Yemen) have made strides toward establishing independent nationalisms in the contemporary race for unique identities; however, their histories, peoples, and musical traditions, particularly those of nomadic Bedouins and coastal seafaring populations, have overlapped for many centuries. I attempt to sketch out some comparisons, particularly in terms of performance practice, between Oman and the rest of the Gulf States with a focus on maritime music, the music that occurred “on the decks of dhows,” the traditional sailing vessel of the Arabian Gulf. By looking at historical accounts and previous scholarship, alongside ethnographic research I describe some of the conduits for sharing musical influence with the broader Indian Ocean cultural space. My theoretical grounding for this article engages with frameworks for cultural transmission and explores their relevance to the Gulf. Lastly, I critically examine some of the historiographies that have been created around these exchanges and their valence to the political economy of cultural heritage in the region.

The Musical Design of National Space and Time in Oman
Anne K. Rasmussen, Professor of Music and Ethnomusicology, The College of William and Mary

Although known since ancient times for its agricultural fecundity, seafaring ingenuity, and maritime trade around the Indian Ocean, Oman’s national narrative is remarkably “presentist:” a miraculous emergence from the dark ages and entrance onto the world stage that is focused on the personage of its visionary leader Sultan Qaboos bin Said. Due to the personal taste of the Sultan, the consistent acquisition of musical capital has been a strategy for nation building that is unique among Arabian Gulf countries where high-rise construction and the plastic arts are more common symbols of modernity and oil wealth. This article unpacks ethnographic research in 2010-2011 among cultural activists and reformers who are using music as a generative force toward the development of collective identities in a geopolitical space. I analyze three domains of cultural production and consider how the Sultan’s initiatives have resulted in the embodiment of artistic consumption and connoisseurship that are required for musical life in the public sphere: first are the Sultan’s privately controlled military bands, Arab music ensembles, and symphony orchestra; second are public arts festivals that nurture and celebrate traditional music and dance; third is the domain of Omani popular music facilitated by Arab regional interculturalism and media flows that depend significantly on practitioners from Egypt, Iraq, and other Gulf states. I show how these domains of music and dance work to enable the imagination of a cultural space and time for Oman and its historical and contemporary relationships with the Arab world, Africa, Asia, and the West. The ethnographic focus on the Salalah Festival in the Dhofar province, provides a close-up shot of the workings of the state at the local level in a context that is both far from the control of the capitol city, Muscat, but that also reproduces many of the relations of dominance and resistance that is an inevitable artifact of political power and cultural policy.

Acknowledging the African presence in the music of Oman has been a touchy subject since the documentation and propagation of the country’s traditional musics began in the 1980s, just a decade after the founding of the modern nation. Based on my dissertation research in the port city of Sur, historically significant both for trans-oceanic seafaring and trade, and more specifically for its connection to the east coast of Africa, this article analyzes the African-derived performance genres that dominate Sur’s music scene within an ever-elusive concept of Africa. The sacred healing rituals zar, mikwara, and tambura; and the secular genres, mdema, shobani, and fann is-saut have been renamed funun taqlidiyah or traditional arts, national nomenclature that collects the myriad traditions of the country while marginalizing differential identities. Rhetorically, Suri musicians not only adopt, they also emphasize their national Omani identity, while expressing their African identity as of the “other.” Musically, however, their approach to performance including the use of Swahili texts, the predominance of body movement, and multi-layered musical textures produced by a variety of instruments from East Africa, reveals, I argue, the musicians’ African identity as a “self.” The seemingly binary “self” identities articulated by Suri musicians through two differing modes of expression (rhetoric and performance) illustrate not only the problematic nature of the concept of Africa in Oman, but also highlights how simplistically the African presence in Oman has been treated in the music scholarship of this country.