Who Are the Laz? Cultural Identity and the Musical Public Sphere on the Turkish Black Sea Coast
Thomas Solomon 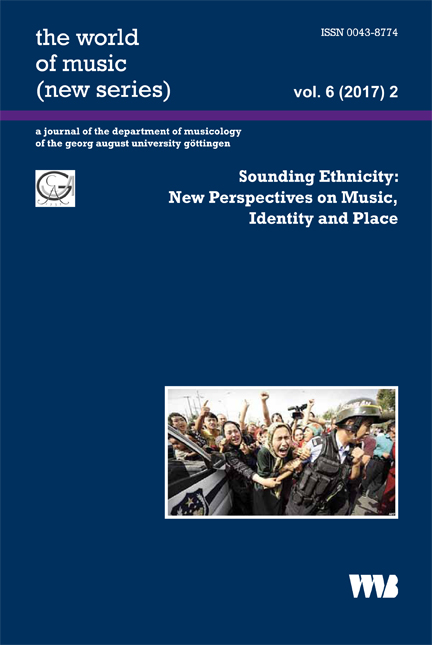 Mark Pedelty, A Song to Save the Salish Sea: Musical Performance as Environmental Activism (2016)
Aaron S.Allen

Mark J.Butler, Playing with Something That Runs: Technology, Improvisation, and Composition in DJ and Laptop Performance (2014)
Leah Kardos

Per Elias Drabløs, The Quest for the Melodic Electric Bass: from Jamerson to Spenner (2015)
Allan F. Moore

This article presents a brief survey of recent studies on musical sound and ethnicity in ethnomusicology and related disciplines. Current trends in vocal and sounded an­thropology suggest new ways to approach ethnicity as a social category that shapes and is shaped by musical sound. Two ethnographic vignettes provide contrasting per­spectives on the concurrent sounding and silencing of these large-scale social for­mations. The author’s forced removal from an ethnic minority concert in Hanoi il­lustrates one way that Vietnamese authorities regulate their structured celebration of minority identities. In Dublin, a solo performance by an Irish Traveller sounds the call for the legal recognition of Travellers as an ethnic group in Ireland. Finally, a summary of the articles illustrates the collective contribution of this issue to these ongoing debates.

This essay reconsiders the introductory chapter to “Ethnicity, Identity and Music” (Stokes 1994). The contributions to the volume as a whole are located in the broader ethnicity paradigms developed by Edwin Ardener (and his milieu) in Oxford in the 1980s, and the original theoretical model of the introductory chapter is clarified. Seen in the light of more recent theorisations of affect, materiality and voice, one can see not only the limitations of Ardener’s ethnicity and identity paradigms, but also their continued theoretical salience, emphasising as they do the performativity of signs, the power relations implicit in muting, and the necessity of an integrated vision of history and ethnography. The article refers to, and discusses in passing, some ethnomusico­logical studies of Colombia, Italy and Turkey.

This article explores the tensions between formulations of ethnic and religious identity among the Uyghurs: a Turkic Muslim people who live mainly in northwest China. It traces the ways in which these tropes of identity are played out in discourse surround­ing “song-and-dance” (naxsha-usul) in the transnational space of online web forums and social media posts which link Uyghurs in the “homeland” (weten)—the Xinjiang Uyghur Autonomous Region—with Uyghurs in the diaspora in Central Asia, Turkey, Europe and North America. China has long sought to depict its minority nationalities as people who are “good at singing and dancing,” and Uyghurs have also embraced musical performance as an important aspect of their national identity. Over the past twenty years, however, an Islamic revival has provided the context for new Uyghur voices that condemn song-and-dance as both un-Islamic and a tool of colonial op­pression. There is a strongly gendered dimension to this discourse, which frequently casts Uyghur women’s bodies as the site of these contested identities. This article considers how Uyghurs, and especially Uyghur women, express and negotiate these shifting identities and shifting ethical norms through their embodied behaviours in a context where verbal debate is tightly controlled by state policies within Xinjiang and rigorously policed by Uyghur online activists in the diaspora.

This article reviews the performance of ethnic minority singers and singer-songwrit­ers in both English-language and locally-devised talent show programmes in China from 2012 to 2017, asking how these musicians manipulate their multi-layered identi­ties in order to balance their identity articulations, audience expectations and politi­cal pressures. Based on five years of watching the most widespread TV music talent show in China, the author provides comparative examples as to how ethnic minority singers and singer-songwriters create and negotiate ethnic-national, pan-ethnic and political identities. The most distinctive of these successfully open up new spaces for debate about identity, personhood, tradition and power in contemporary China. Data is drawn from the analysis of the music in question and from the decisions of pro­gramme judges, and also from the avid commentaries made by show viewers online during and after each round is broadcast.

Who Are the Laz? Cultural Identity and the Musical Public Sphere on the Turkish Black Sea Coast1
Thomas Solomon

This article discusses contrasting musical performances of identity on the eastern Black Sea coast of northern Turkey. This region is home to an ethnolinguistic group known as the Laz, but the term Laz is also used in a much broader sense in Turkey to refer to people from the entire Black Sea coast of Anatolia. Unflattering stereotypes abound in Turkish popular culture about Black Sea coastal dwellers, and a genre of Turkish popular music known as “Laz pop” plays extensively on these stereotypes. Since the 1980s a Laz cultural movement has sought to reclaim Laz identity through revitalizing traditional Laz culture, language and music. The article identifies three musical approaches to reconstructing Laz identity: cosmopolitan youth, back to roots and neo-traditional. All these musical ways of performing Laz identity are in dialogue with each other, forming a musical public sphere in which Lazness is negotiated not just through rational discourse in language, but also through performative gestures mediated through commercial recordings and videos.

In the Republic of Guinea, dissent—at times even democracy—is often blamed on ethnocentrism. As the country transitions from an authoritarian to post-authoritarian regime, dozens of new political parties have emerged, most often hewing closely to ethnic lines. While ethnic differences have always been present, felt, exploited, and manipulated in Guinea, their visibility and audibility in the form of multiparty politics has created new anxieties about division in the country. In response to this situation, Guinean leaders as well as ordinary citizens often turn to a well-worn and commonly heard phrase in the country, that “Guinea is a family.” Yet this seemingly innocu­ous phrase has a particular history to it, and is contentious and contested, in large part across ethno-political lines. In this article, I critically examine the notion of the Guinean family, as deployed by the state and cultural actors alike. I consider uses of this phrase in political speech and in music, and argue that in both of these cases, calls for unity around the Guinean family are in effect calls for political loyalty and against dissent.