A Song and Dance of Hypermasculinity: Performing Ukrainian Cossacks in Canada
Marcia Ostashewski

Putting Some Air on Their Chests: Movement and Masculinity in Competitive Air Guitar
Sydney Hutchinson

Masculine or Feminine—Ancient or Contemporary: Raqs Sharqi and a World of Converged Images
Barbara Sellers-Young 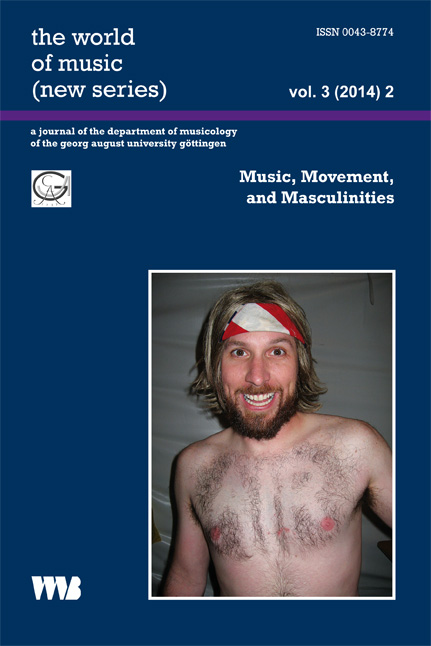 Despite influential recent scholarship on men in dance, the topic of bodily movement remains feminized in much of Western popular culture as well as in academia. Yet because gender is a construct that relies on perceptions of the body, regardless of that body’s gender, bodily movements provide keys to understanding how masculinities are constructed or questioned in different cultural contexts. This special issue seeks to understand how staged performances present or challenge ideals of masculinity, as well how masculine and feminine genders are constructed relationally through dance performance. It developed from a panel presented at the 2010 meeting of the Society for Ethnomusicology titled “Music, movement, and masculinities,” but has since grown to include additional scholars.

The issue will begin with an introduction contextualizing and commenting on the range of articles in the volume. In the first, author 1 suggests answers to the question of why ballet pas-de-deux gender protocols have failed to evolve, even in the face of numerous academic and choreographic critiques of ballet’s gender roles. Next, author 2 examines the ironic portrayal of masculine rock stereotypes in competitive air guitar movements, demonstrating the genre’s use as a bodily critique of rock’s gender and racial constructions. The third contribution focuses on how capitalist realities have altered the ways in which Hungarian men creatively represent themselves through modern folk dance, while the fourth provides an analysis of the “official” masculinities displayed in Hungarian State Folk Ensemble choreographies. The fifth article challenges the construction of “oriental dance” as a feminine realm by demonstrating that male performers present a particular, orientalist type of masculinity. Finally, author 6 examines the performance of masculinities in ballet-based Ukrainian concert dance in Canada.

As a whole, the proposed issue presents diverse views on contemporary masculine bodily expression from both established and emerging dance scholars, and it covers a broad range of geographic areas. Its examination of staged dance performances around the world, each of which aestheticizes masculinities in a different way, will be of interest to ethnomusicologists, dance ethnologists, folklorists, and performance studies scholars. In addition, it takes impetus from the current interdisciplinary interest in gesture studies, while pushing that field forward through its specific emphasis on masculine movements in popular, traditional, and classical musical contexts.

Nicholas Cook, Beyond the Score: Music as Performance (2013)
Wouter Capitain

Skiffle at its Best: Skille Steel Orchestra (2014)
Jeffrey A. Jones

Why consider music, movement, and masculinities together? This introduction begins by probing the historical circumstances that have contributed to ethnomusicology’s squeamishness about dance and gender. After summarizing some current approaches to thinking about movement, sex and gender, and the differences between performance and performativity, the author considers how the six contributing authors engage with the complex relationships between masculine subject positions, masculine behaviors, symbols of masculinity, and how these variables operate and change in different contexts. The essay concludes with some thoughts about how these interrogations of masculinities on stage contribute to broader discussions.

A Song and Dance of Hypermasculinity: Performing Ukrainian Cossacks in Canada
Marcia Ostashewski

In the 1990s and the 2000s East European men were in crisis, as multiple conflicting masculinities emerged. In this essay I compare the 2006 choreography A férfi tánca (“Dance of a Man”) with the 1999 album Nagyvárosi bujdosók (“Urban Outlaws”) to discuss how folk revivalists understood the social costs of masculinity in Hungarian history and at the turn of the twenty-first century. Hungarian men’s folk dance provided a powerful vehicle for self-critique, I argue.

This essay explores culturally derived and institutionally sanctioned gender portrayals in classical ballet by focusing on the historical evolution of pointe work. Despite some recent experiments, ballet men tend to dance on pointe only for comic effect, as in Les Ballets Trockadero. The contemporary exception of a scene from choreographer Edouard Lock’s Amelia is examined and, for comparison, hermeneutical dance analysis is also applied to the practice of Georgian folk dance men, who dance on their toes in a form where women do not. It is suggested that both ballet women on pointe and Georgian men on their toes embody the qualities of athletic strength (often coded male) and softly graceful elegance (often coded female), and that examining and challenging these culturally rooted practices reveals underlying, persistent stereotypes that inhibit the evolution of both ballet and theatricalized folk dance.

Putting Some Air on their Chests: Masculinity and Movement in Competitive Air Guitar
Sydney Hutchinson

While white men in the US and parts of Europe are often described as being ineffectual dancers who are not “in touch with their bodies,” they do respond physically to music, if not primarily in ways generally described as dance. Among rock music fans, bodily response to music often takes the form of air guitar, a type of performance that resembles dance in its use of rhythm, steps, and even choreography. Since 1996, competitive air guitar has emerged as an international phenomenon, spreading from Oulu, Finland, to more than two dozen countries. Partly an ironic exaggeration of hypermasculine “cock rock” conventions and partly the heart-felt tribute of rock fans, successful air guitar performances balance silliness with sincerity. Although competition is still dominated by white males, air guitarists question typical rock constructions of masculinity and race through humor and irony. This paper draws on field research conducted at 2009 championships in Germany and Finland and numerous interviews to explore the relationships between masculinity, movement, and musical knowledge in air guitar performance.

Staged folk dance is a unique mode of cultural expression that relies on the artistic framing of traditional forms. It is well equipped for socio-cultural commentary precisely because of its dual obligations to tradition and to creative innovation. In creating messages that have relevance to contemporary audiences, departures from the expectations of tradition can be used as a powerful communicative and artistic device. This is evident in recent choreographies of the Hungarian State Folk Ensemble. The manipulation of traditionally gendered gestural vocabularies has been used as a communicative strategy to confront larger issues facing Hungarians in the twenty-first century, issues like globalization, national identity, and the role of heritage preservation. As a communicative device, the manipulation of gendered dance in choreographies of the Hungarian State Folk Ensemble depends as much on ethnology and historiography in constituting expectations as it does on staged departures from those expectations. My article looks briefly at two Hungarian State Folk Ensemble choreographies, and then explores the forces that constitute the rich potential for commentary in the manipulation of traditionally gendered gestural vocabularies.

Masculine or Feminine—Ancient or Contemporary: Raqs Sharqi and a World of Converged Images
Barbara Sellers-Young

Raqs Sharqi, also known as belly dance, has a long and varied history within an Orientalist framing as a feminine form. However, this perception does not acknowledge the complex discourses of masculinity and femininity related to the historical positioning of male and female dancers in North Africa and Middle East; nor does it reflect the dialogue that has taken place between male and female dancers as part of the evolving community of belly dancers in the twentieth and twenty-first century. This article considers the global discourse around raqs sharqi and gender through the intersection of concepts of the liminal, as articulated by anthropologist Victor Turner, and convergence, as outlined by media theorist Henry Jenkins.