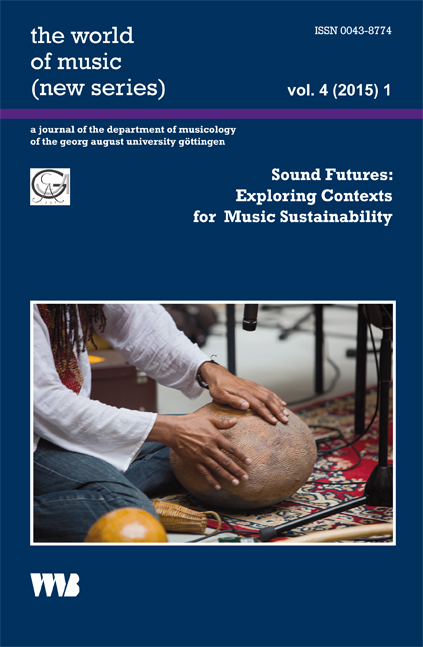 David A. McDonald, My Voice is my Weapon: Music, Nationalism, and the Poetics of Palestinian Resistance (2013)
Stig-Magnus Thorsén

Birdman (Or The Unexpected Virtue of Ignorance) (2014)
Jacqueline Avila

Audiovisual archives have made important contributions to the continuing performance of some genres through repatriation projects, but misconception about archives and some of their historical shortcomings make them less effective than they might be. In the early twenty-first century, digital recordings, improved communications, and local documentation initiatives make it possible for archives to play even more significant roles in the future. This paper argues the benefits of decentralizing some of the functions of archives in order to empower and enable local communities to document and access their traditions while ensuring that organization, preservation and ethical access will be managed assiduously for the long term. Based on the authors’ experiences in India and the Americas, it suggests ways scholars, local communities, and audiovisual archives can collaborate to contribute to sustaining vibrant traditions in the performing arts and concludes with specific recommendations for archiving and planning community projects.

This article discusses the construct of sustainability in relation to West African educational contexts, and specifically, the case study of Nandom. Nandom is located in the north of Ghana and has about 10,000 people living in the town and its satellite villages, all with some degree of access to mains electricity, local radio stations, cell phones and the internet, yet isolated from the main centers of power further south. The experience of school music education in Nandom is presented here as a way of exploring the impact and ultimate interpretation of government policy when applied in a remote context. The article discusses instrumental music tuition in particular, and provides an empirical discussion of the daily activities of music teachers and students and the steps they must take to execute their music education goals.

Since the beginning of this century, China has engaged with the preservation and development of its intangible cultural heritage with an intensity unlikely to be matched by any other country in the world. To this end, it has rolled out a large number of initiatives across all levels of government. This has led to a national intangible heritage list containing 1,828 items as of 2014, hundreds of millions of yuan invested in preservation, and visitor numbers of up to 20 million for major events on intangible cultural heritage. At the same time, this enormous effort raises myriad questions in its relationship to recognising diversity, identity, empowering communities, nation-building, urbanization, and other contemporary realities. Loosely following the five domains outlined in the introduction, this paper describes the first fifteen years of intangible heritage protection as it relates to music in China, and some of the key issues for its future.

This paper presents a model for understanding the ways in which open air music festivals proactively engage with environmental and ecological issues. It focuses on the Australian context, with two case studies of well-known and well-established festivals providing the basis for a framework that discusses four domains of environmental engagement: promotional, operational, conceptual and spatial. This framework is illustrated with examples drawn from ethnographic observations and interviews undertaken in 2012, during and after the running of each of the case study festivals. The paper argues that, through the examination of elements within these domains, new perspectives on musical engagement with the environment can be obtained.

Sustainability, in event management, results from a variable combination of economic feasibility, improved reputations for producers and/or artists, ongoing relationships among producers and others in the event industry, and increased production skill competency (Pernecky 2013; Kotler 1997). This article examines the variety of ways that Indian producers, as entrepreneurs, create sustainable production networks by maintaining relationships within local as well as global Indian communities. To illustrate sustainable production networks, this ethnographic research offers case studies of commercially produced concerts, featuring touring Bollywood performers in Auckland New Zealand. Ultimately, I argue that for an entrepreneur, building and maintaining sustainable production networks depend on reputation and their personal relationships, in order to continue producing events in a competitive market place. Producing successful events are important not only for individuals’ economic goals; they also have the potential to contribute to the building of economic and social sustainability of cultural communities. The findings in this article are adapted from the research for my doctoral thesis (Booth 2014).

Much of the information regarding sustainability comes to us from musicians via scholars. Public authorities and music industry representatives tend to be consulted much less, in spite of their crucial roles in the ecology of music genres. As President of the International Music Council, Richard Letts conducted a truly global consultation among the members of his organization and their networks, and reports on key findings in seven areas that may affect the sustainability of music genres and cultures.