“We Are Losing Our Encantados because We Can’t Hear Them Anymore.” Silence, Extractivism, and Politics of Listening in/to the Brazilian Amazon
Maria Fantinato Géo de Siquera

“So Nicely in Harmony with the Tropical Nature .” Listening to the Cultural and the Natural in Suriname, 1883–2020
Emiliy Hansell Clark 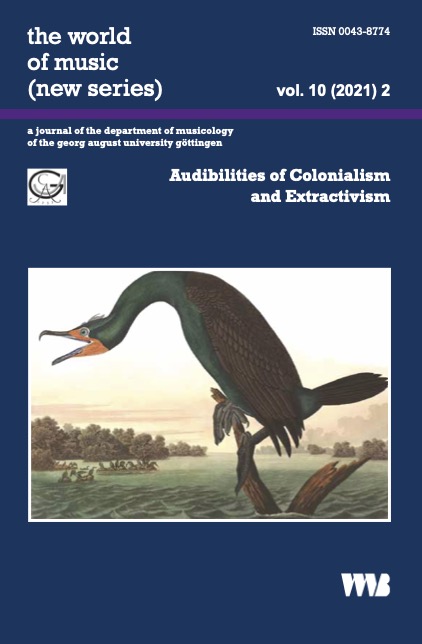 We Are Losing Our Encantados because We Can’t Hear Them Anymore.” Silence, Extractivism, and Politics of Listening in/to the Brazilian Amazon

This article translates the words of Ana Laíde, a social educator in the Xingu region of the Brazilian Amazon, into an English-speaking academic context by weaving together her reflections about the loss of forest and river spirits with an academic debate on listening and extractivism. In dialogue with her words about the silence of the water and the loss of forest and river spirits to neoliberal megaprojects, I examine how silence participates in an economy of extraction in which incompatible notions of nature clash while crystallized sensorial machinations of neoliberalism destroy place from a safe distance. This article is based on a chapter of my PhD Dissertation “Resonances of Land: Silence, Noise, and Extractivism in the Brazilian Amazon” (Columbia University, 2021).

“So Nicely in Harmony with the Tropical Nature .” Listening to the Cultural and the Natural in Suriname, 1883–2020

In Suriname, a former Dutch colony on the Caribbean coast of South America, a celebrated but tense “plurality” has emerged from the crucible of colonial conquests, (forced) labor migrations, and shifting governing policies. Sound and listening have played a role in a long history of shaping notions of ethnic difference and its impact on individuals’ lives and livelihoods. This article investigates this sonic history through three moments of listening to and making sense of colonial difference. First, in 1883 in Amsterdam, a colonial exhibition featured people brought from the Netherlands’ overseas territories in an “Indies Park” and a “Suriname Natives” exhibit, which put bodies, practices, and musical instruments on display in quite different ways. Second, when indentured laborers were brought from the Dutch East Indies to replace formerly enslaved Afrodescendants on Surinamese plantations beginning in 1890, their musical traditions accompanied them, shaping how different groups of colonial subjects were perceived and governed by European ears and colonial policy. Third, in contemporary times, projects of both natural extraction and conservation have affected different populations in Suriname invastly different ways, ranging from financial and political gain to dispossession and displacement. This article argues that the contemporary politics of the postcolonial “plural” nation, including how natural extraction and conservation are managed, reflect a long colonial history of listening that differentiates between those who are able to make something of the “raw” natural, cultural, and sonic resources that surround them, and those who (allegedly) cannot.

Hearing the Given and the Made in South African Maskanda Music

In this article, I discuss examples of cultural and musical appropriation in and through South African maskanda music, often marketed as “Zulu blues.” These maskanda appropriations (by musicians, listeners, producers and researchers, including myself) have responsive as well as extractivist potential. Maskanda musickers consider songs, styles, techniques or instruments to be “given” and re/make these on their own account. By claiming command over this primary material they exert power, for instance by re/claiming agency over their own (or someone else’s) body or by confirming African cultural authority and normativity on global stages. Rather than discussing the economic implications of cultural appropriation, I focus on the epistemic implications of distinguishing between what is given (that can be resourced, mined and exploited ad infinitum,) and what has been made (acquiring rarity and value through extensive processing). I address how this implied sensorial hierarchy between the given and the made (Ochoa 2014:21) plays out in the realms of music and sound. As the maskanda case shows, in musicking activities it is not so easy to distinguish the making from the remaking and the unmaking. Distinctions between the given (in being taken for granted) and the made (with its madeness being accredited) are porous and changeable. An investigation of the liminal spaces between assumed “aural givens” and “aural mades” may provide us with more insight into the dynamics of unobtrusive creative inventions becoming voracious industrial routines.

This article presents a comparative reading of two representative texts from the histories of Western art music aesthetics and medicine in order to examine the interrelations between philosophical theorizations of musical experience, on the one hand, and medical theorizations of drug-induced experience on the other. My approach is shaped by Derrida’s writings on the concept of the pharmakon (1981) and the broader “rhetoric of drugs” (2002) in addition to the work of Buck-Morss (1992) and Ramos (2010). I read Johann Georg Sulzer’s influential Allgemeine Theorie der Schönen Künste (General Theory of the Fine Arts, 1771–1774) alongside Franz Joseph Hofer’s Abhandlung vom Kaffee (Treatise on Coffee, 1781), highlighting the similarities between Sulzer’s characterization of music’s powerful effects on the mind-body-soul and Hofer’s description of coffee’s virtues and potential dangers. I argue that both texts construct their respective objects of study according to the epistemologies of the “coloniality of power” (Quijano 2000), construing both music and coffee as “anthropotechnologies” (Romandini 2010:11). I argue, in other words, that both music and coffee are theorized as tools for the formation and “overrepresentation” of particular forms of subjectivity unique to an idealized version of the human known as “Man,” whose modes of thinking and feeling are defined in contradistinction to his animal/savage/less-than-human Others (Wynter 2003:267).