For the Glory of the Nation: Nationalist Construction and Global Re/presentation of Traditional Performing Arts in South Korea

Towards One Korea: Traditional Korean Music Today in the Korean Diaspora in London

The P’ansori Experience in Europe: Invitation, Promotion, Commission, and Collaboration

Hallyu Through the Grassroots: Experiences of Kugak in Europe and Beyond 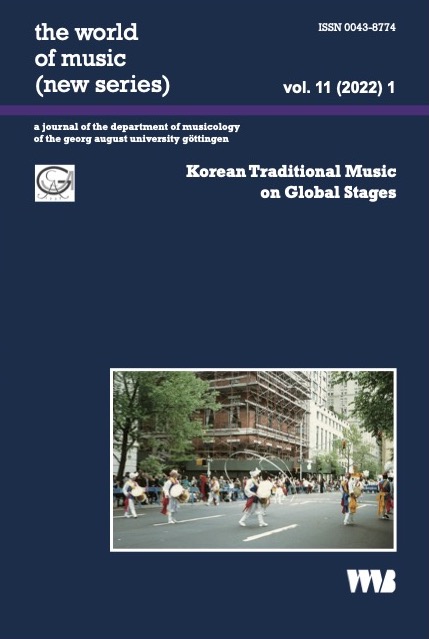 This article introduces the theme of this edited issue—live performances of traditional Korean music (kugak) outside of Korea, mainly in the ‘Western’ world; it lays out reasons for its relevance and shares issues and questions. The six articles are part of an ongoing exploration of what happens when music that is highly specific and has an identity relating to a certain place is performed away from its geographic origin. The authors discuss various genres, from solo singing/storytelling (p’ansori) and folk songs (minyo) to instrumental music (such as sanjo improvisation) and ensemble genres, as used by professional and amateur musicians in Europe, the United States, and other parts of the world. Based on ethnographic fieldwork and historical research, the articles demonstrate the diversity of what traditional music means to those who make, promote, and listen to it, crucially, in this case, including the Korean overseas diaspora. The authors share a consciousness of power dynamics that are at play when traditional music from a postcolonial nation is performed on ‘global stages,’ that is, in contexts dominated by Western hegemony. By responding to debates regarding nationalism and globalization, identity and community formation, as well as authenticity and cultural appropriation, we hope that our articles may serve as a touchstone for engagement with additional genres and regions.

For the Glory of the Nation: Nationalist Construction and Global Re/presentation of Traditional Performing Arts in South Korea

This paper examines how overseas performances of Korean traditional music (kugak) and dance contribute to the construction of (South) Korean national identity, cultural diplomacy, and propaganda within domestic and global contexts. Korean performances abroad played a key role in raising the profile of South Korea from early exposure to the world in the Chicago World’s Columbian Exposition of 1893; through 36 years of Japanese colonialism; followed by the Korean War and global cultural Cold War politics; an era of economic success coupled with strong nationalism; to the twenty-first century global awareness of Korean culture. Tracing over a hundred years of global re/presentation through music and dance, this paper underlines the importance of concepts of the nation in this process and examines the political, ideological, and sociocultural conditions—both national and international—which have impacted the construction of kugak over time.

The Little Angels Children’s Folk Ballet of Korea is a children’s traditional music and dance performance troupe which aims to disseminate a rich and dynamic image of Korea’s cultural heritage. Young professionally trained performers represent Korea and its culture at important international peace events, replacing the image of poverty that South Korea had after the Korean War (1950–1953). The troupe is owned by the Unification Church (also known as the Unification Movement or Unificationism), a new religious movement founded by Moon Sun Myung in 1954. Exploring the purpose of its establishment and the preparation and reception of itsperformances, this article argues that it is an entangled artifact, which raises questions about the interconnectedness of the new religious movement, kugak performances abroad, and religious involvement in nationalism in South Korea during the 1960s and 1970s.

Transnationalism and interculturality offer models of how musicians interact within their local community. The presence of Korean music in New York City has grown steadily over the last 40 years, promoted by Koreans who emigrated and set up new lives in the United States. Korean music has developed in three phases that are presented in this paper. The first phase consists of amateur immigrant musicians, transnational agents, who represent the “localization” of outsiders becoming “native,” adapting to their new environment. The second phase includes Korean musicians who step outside of tradition, embracing the spirit of globalization and intercultural performance venues. The third and last phase identifies new festivals that bring local and international musicians together, creating opportunities for new interpretations of old traditions. Throughout these phases, the interdependency and collaboration among Korean and non-Korean musicians has strengthened the Korean cultural presence in New York and contributed to a vibrant new soundscape.

Towards One Korea: Traditional Korean Music Today in the Korean Diaspora in London

The Korean diaspora in Great Britain was first recognized in the mid-1900s, and there are currently an estimated 40,000 South Koreans residing in the United Kingdom. In addition, since the beginning of authorized admission of North Koreans as refugees in 2004, many have come to the UK in search of better lives. This number is now estimated to be around 620 (Song & Bell 2019). These individuals have subsequently formed what is known as Koreatown in the suburbs of South London and maintained their ethnic culture and practices in diverse ways. The diversity of the population has also affected the musical activities of the community. I aim to explore current activities relating to traditional Korean music in the Korean community in London, focusing on three functions: maintaining ethnic identity, its therapeutic nature, and social cohesion. Ultimately, this article attempts to understand how these Koreans create an “imagined community” (Anderson 2016) through traditional music as they perform, share, and transmit a sense of “Koreanness.”

The P’ansori Experience in Europe: Invitation, Promotion, Commission, and Collaboration

Korean p’ansori singers have been performing in Europe since at least the 1960s. In this paper, I explore the reception of this singing/storytelling art in France, Germany, and the United Kingdom and analyze the diversification of performance formats, the expansion of audiences, and the agents that shape this process. Based on performance programs and publicity, as well as press coverage, I distinguish the various purposes that p’ansori in Europe has served, from political agendas and nation branding to individual aspirations and artistic exchange. Complementing earlier research on the globalization of traditional Korean music, I attempt a sketch of local responses to p’ansori in Europe that includes the contexts and audiences of performances, means of mediation, and the conditions of creative cooperation.

Hallyu Through the Grassroots: Experiences of Kugak in Europe and Beyond

As the popular culture-driven “Korean Wave” (Hallyu) continues to gain attention worldwide, many attempts have been made to incorporate various other aspects of Korean culture within it, including traditional Korean music (kugak). Thus far, most top-down cultural policy has continued to focus on the initial contact with kugak rather than encouraging more in-depth engagement. However, local grassroots efforts have begun to develop into dedicated aficionado groups, who are not only expert listeners but also beginning to foray into performance. Addressing the case studies of the Francophone p’ansori (sung storytelling) scene and the K-Community Festival, I explore the potential for the kind of in-depth engagement seen at the grassroots level to also be employed on the cultural policy level.