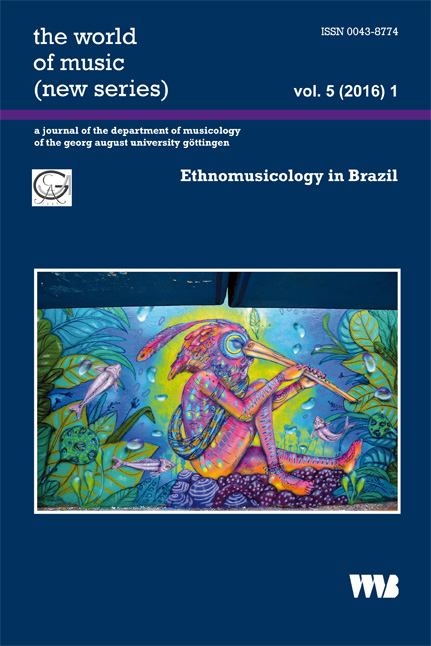 Donna A. Buchanan (ed.), Soundscapes from the Americas: Ethnomusicological Essays on the Power, Poetics, and Ontology of Performance (2014)
Henry Stobart

Daniel B. Sharp, Between Nostalgia and Apocalypse: Popular Music and the Staging of Brazil (2014)
Barbara Alge

This essay examines the role of ethnomusicology in Brazil, observing its place not only in the current university/academic context but also in Brazilian society generally, given that its central research foci include Brazil’s diverse musical cultures. By way of a historical contextualization of pioneering (ethno)musicological studies and current trends, this essay outlines the main aspects of Brazil’s ethnomusicology in terms of its practice and theoretical preoccupations. Further informing this analysis are theoreti­cal discussions related to the so-called central and peripheral countries, as well as the growing engaged ethnomusicology movement, in social, political, and cultural terms. The essay also offers a perspective on ethnomusicology graduate programs in Brazil, suggesting a geographically specific, localized educational approach. Yet ethnomusicology is also practiced beyond academia, being quite important to the public sector, whether in policy or institutions/organs, and uses this space to create new practical and conceptual directions for the discipline. The increasingly vibrant exchange of experiences between ethnomusicology and other fields of knowledge suggests the need for broader considerations of concepts such as music, education, identity, and representation, giving Brazilian ethnomusicology an important role as a space for dialogue and action.

A well-known definition of the work carried out in the field of ethnomusicology, pro­posed by Jeff Todd Titon (1997:91), conceives it as “the study of people making mu­sic.” While this definition surely cannot be applied to the whole intellectual history of ethnomusicology, it reflects well an important shift in focus that characterizes its most
recent phase. Even if we ethnomusicologists are increasingly focusing on people, the ways we relate to them to produce knowledge have changed little. On the one hand, we have produced knowledge “on” or “about” specific people and the music they make (in scholarly and theoretical work) and, on the other hand, we have used our accumulated knowledge “for” them (in applied or advocacy work). The perspective of work the authors of this article will focus on follows a third path: to produce knowl­edge “with” the people we encounter around the world or next door. Despite the pecu­liarities of their individual research experiences (in terms of theoretical and practical approaches as well as the different conditions of knowledge production within them), the authors of this article share a common general challenge: to assume dialogue and collaboration as the necessary basis for a more socially and politically engaged work.

For South American indigenous peoples, music making is intimately linked to the idea of “vital breath” as a central means of knowing and experiencing the world—a rea­son why voices and aerophone ensembles are such emblematic acoustic instruments throughout the continent. Ethnological studies have increasingly recognized and re­affirmed this expressive link between musicality and life, suggesting that for millen­nia acoustic-musical practices and repertoires have played a key role in engender­ing indigenous lifeways. However, continuing to live as an indigenous people on the continent today requires more than ever a determined resistance to the expropriation and violence endemic to capitalism’s seemingly relentless invasion of the geographic and existential territories of these peoples. At the core of this resistance we find musi­cal practices. These range from ritual chants and aerophones to other sound forms employed in the fight to avert annihilation. Formed in this context of political intran­sigence, our collective project “The Work of Memory through Songs” is a partial response to the request voiced by various indigenous ethnic groups to document and discuss these musical practices. In our view, the urgency and importance of such a project reside in the ways in which it engages with the aesthetic-musical forms of indigenous peoples, recognizing their diverse modes of being and acting in the world, going beyond the merely museological aims of material collection. Assisted by a diverse group of researchers, both indigenous and non-indigenous, the Sound Documentation Project (ProDocson) has been supported since 2011 by the Museu do Índio, a state institution run by the Fundação Nacional do Indio (FUNAI), as a pilot program in documenting and analyzing indigenous sounds. Currently working with six indigenous groups (Tikmũ’ũn, Guarani Kaiowa, Guarani-Mbyá, Enawene Nawe, Baniwa, and Krahô), the project comes on the heels of an extensive program of cultural and linguistic documentation (Programa de Documentação de Línguas e Culturas Indígenas, PROGDOC) already completed by this institution, and aims to attend to the need for more comprehensive policies regarding the documentation of musical-ritual activities.

The Project Meeting of Knowledges aims at the inclusion of traditional knowledges in Brazilian universities from the perspective of decolonizing the Eurocentric acad­emy, including the areas of teaching and research in music. The project was designed by anthropologist/ethnomusicologist José Jorge de Carvalho, head of the Institute of Inclusion in Higher Education and Research, located at the University of Brasília. It started in 2010 with a course entitled Arts and Crafts of Traditional Knowledges, which was taught by masters of traditional knowledges of indigenous, Afro-Brazilian, maroon, popular culture, and other traditional communities. This course has an in­terdisciplinary approach and is open to all undergraduate and graduate students. The project was expanded to other universities in the country, including the Federal University of Pará, where it was offered as an obligatory course for the Music Education degree and for the Graduate Program in Arts. The project provided an opportunity for important discussions about research into and the teaching of music at the universities, mainly due to the diversity and singu­larities of Brazilian musical knowledges (and Latin American ones in general), and their absence in the curricula of our music schools. The Meeting of Knowledges is especially relevant in the new context of the legal obligation to teach Afro-Brazilian History and Culture in primary schools. In this sense, it contributes to the prepara­tion of music teachers, thus leading to an expansion and democratization of music curricula. The project also establishes dialogues with previous paths already taken in ethnomusicology, such as the bi-musicality created by Mantle Hood (1960), as well as contemporary perspectives such as participative and/or applied ethnomusicology, always taking into account the new policies of inclusion and validation of traditional knowledges in formal education. All of these movements foster the theoretical and methodological stand of the Meeting of Knowledges, helping the emergence of non-North Atlantic epistemologies to think, live, and teach music.

Brazil has recently witnessed the consolidation of a few public policies aimed at affir­mative action programs for the Afro-descendent population. At the same time, laws af­fecting institutionalized music instruction in Brazil have undergone significant chang­es. This paper discusses and analyzes a few perspectives and challenges for the joint application of two laws associated with these processes: Lei 10.639/2003, a law that defines “Afro-Brazilian history and cultures” as compulsory themes in primary and secondary education, and Lei 11.769/2008, a law that establishes music as a compul­sory part of school curricula. Emphasis is placed on issues related to the integration and study of musical knowledge connected to Afro-Brazilian cultures within the con­text of formal education, based on a dialogue and intersection between ethnomusicol­ogy and music education. The issues developed in this paper show that knowledge produced in both fields have the potential to guide music teaching concepts and prac­tices in schools so that they adequately consider the specificities of Afro-Brazilian musical knowledge. Still, while defending the idea that research, especially ethno­musicological research, offers music teachers an invaluable repertoire of concepts, symbols, and aesthetics related to such cultural practices, we nevertheless emphasize that their actual incorporation into music education in schools and, consequently, the promotion of multicultural and interethnic musical education in Brazil, is subject to a number of social and political issues that are still being developed.

The date on the Catholic calendar commemorating the birth of St. John the Baptist, June 24, is widely celebrated in the northeast of Brazil, including the two states at the center of this essay, Pernambuco and Paraíba. “June Festivities,” or “St. John’s Day Festivities,” take place from early June to mid-July and are characterized by the
presentation and representation of diverse cultural traditions of the region. Forró, the typical music of this period, brings together diverse musical genres, dances, and a strong festive connotation. In this article, we discuss issues related to the relation­ship between, on the one hand, the way in which forró musicians learn and, on the other hand, their professional lives, as well as changes that have been taking place in the organization of St. John’s Day festivals since the late twentieth century. Al­though forró musicians born before the mid-1970s acquired their musical competence outside of formal educational institutions, large segments of the younger generation attend schools of music (though not necessary in lieu of other learning strategies). Meanwhile, changes in the organization of professional forró activities are linked to the larger transformations of northeastern June festivities since the late twentieth century. By focusing specifically on the training and professional activities of the mu­sicians themselves, this article seeks to contribute to broader debates regarding the relationship between music and festivals.