Applied Experiments in Music-Making Across Borders

Applied Experiments in Collaboration Along the Silk Road
Rachel Harris

From Klezmer to Dabkah in Haifa and Weimar:
Revisiting Disrupted Histories in the Key of D
Abigail Wood 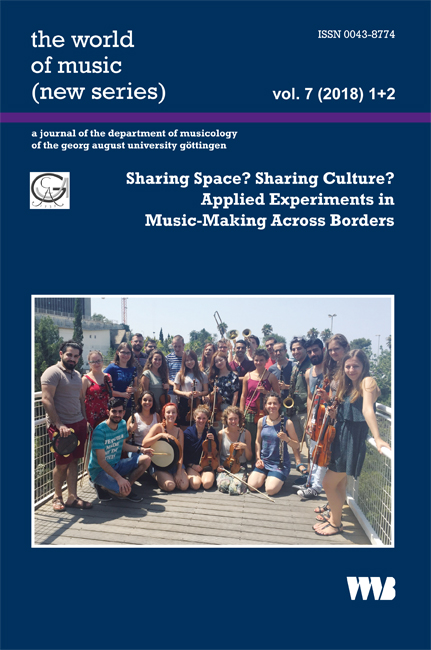 Ryan O’Shaughnessy. Back to Square One (2016)
Andrea Harris Jordan

As a research method, the practice of music, our version of the anthropologist’s participant observation, is essential to the way we come to understand the music and the people we eventually represent through presentation and publication. More than just the key to unlock the secret doors of discourse, I have long considered the practice and performance of Arab music to be a methodology for both my fieldwork and teaching.  “Performing in the field” facilitates exchange in non-linguistic fields and has provided my hosts a view into my personhood that transcends or complements my professional persona. On campus, in the classroom, and among the community, the performance of musics from the Arab and Islamicate world constitutes activism. The Middle Eastern Music Ensemble that I founded in 1994 has been a context for exploration, exchange, and experience among students, faculty, and invited guest artists, that, when shared through public performance, evinces a kind of unapologetic advocacy that has become central to my work. This paper describes examples of community-based collaboration and activism through music that unfolded during my ensemble’s first two international study and performances tours, both of them in 2014, one to Oman, where I have continuing research interests and the other to Morocco, the research terrain of my colleague and long-time collaborator.  While we were grateful for the cooperation and generosity of our hosts we were surprised at the ways in which our visit allowed our hosts to extend themselves in the production of public projects that may not have been possible without our participation. My analysis of six performances, three in Muscat, Oman, and one each in the Moroccan cities of Oujda, Rabat, and Marrakesh, Morocco resonates with the recent call by the SEM/ICTM Forum to “transform ethnomusicological praxis through activism and community engagement,” and asserts the ways in which our ethnographies are necessarily collaborative.

Applied Experiments in Collaboration Along the Silk Road
Rachel Harris

This paper considers the nature of work done in performances that seek to “create bridges” across cultures and to highlight shared heritage across political borders. What agendas are privileged, and what forms of representation are entailed? I explore these issues via case studies in musical collaboration along the “Silk Road,” the ancient trade routes brought to life in the contemporary imagination to link cultures from Europe to East Asia. I privilege the perspectives of the various actors involved, arguing that careful attention to the experiences of participants serve to texture our understanding of cultural border-crossings. Music-making, as a form of embodied practice, may serve as a way of deconstructing conventional narratives but it may also serve to uphold established hierarchies. I argue that in cross-border encounters musicians draw on diverse imaginaries—learned aesthetic norms, bodily habitus and imaginative resources—casting their collaborators as musical and social others in their efforts to make sense of what they hear.

From Klezmer to Dabkah in Haifa and Weimar:
Revisiting Disrupted Histories in the Key of D
Abigail Wood

During the summer of 2017, a musically and culturally diverse group of fifteen young musicians from Haifa, Israel, and fifteen from Weimar, Germany, came together for ten days in each city to form the “Caravan Orchestra,” a new ensemble that sought to reopen lost musical connections between cognate Jewish, Arabic, and European repertories. Seeking to explore an “often-overlooked historical, transnational cultural matrix” rooted in the long arc of the Ottoman empire, the Caravan project proved to be a wider voyage of discovery, in which a large group of stakeholders from two countries—ethnomusicologists, musicians, students, funders and institutions—explored what such a conversation might entail. Like many intensive musical projects, the Caravan Orchestra was a transformative experience for many of those involved, marked by the exhilaration of producing good music on a concert stage and validated by audience applause, dancing and ovations. Yet beyond aesthetic satisfaction, what kind of insights can such a project offer into the “disrupted musical histories” that it seeks to explore? In this article, I explore this question via three elements of the Caravan experience: musicianship, repertory, and identities.

Moving away from a university context, and within a framework of intercultural, performance and social change studies, this article explores the constant border negotiations of a professional international world music band, formed by thirteen musicians from seven countries: India, Senegal, Sweden, France, England and Scotland. Imagined as a utopian social experiment by two Swedish brothers in 2012, Världens Band (the World’s Band) quickly grew beyond the project phase and established itself as a group, performing self-branded “transglobal roots fusion” music.

This article outlines a reconfiguration of the “network” trope as a means of conducting reflexive, applied research on society, technology, and music, towards positive social transformation, with application in post-war Liberia. In the social sciences, the mathematical concept of graph or network has provided a powerful paradigm both for scientific explanation and humanistic understanding, through social network analysis. Its application in the present article transcends these applications through a shift in emphasis, from explanation and understanding to social transformations, induced by forging new transnational networks out of the collaborative, iterative cycles of participatory action research (PAR) centered on music, digital musical production, and sociomusical relationships. These networks are designed to address what the UN has identified as the “responsibility to protect” (R2P), as a means of mitigating that dehumanisation underlying all human rights abuses. Beyond explanation or understanding, I emphasise PAR networks as tools and instances of social transformation, not only as means, but as ends in themselves, holding that the right sort of transnational social network—a harmoniously interacting global community—is precisely what is sought. Further, whereas the network actor is typically either human (in social network analysis) or non-human (in much network science), I combine the two in applied research, building on Latour’s “Actor Network Theory” (ANT) in two respects. First, beyond joining the human and nonhuman I consider also their double intersection: the expressive arts (including music) as the human nonhuman; and dehumanisation as the nonhuman human. Second, I extend such constructivism to transformative participatory action research. The chapter charts the iterative formation of a transnational PAR actor-network, including Liberian refugee musicians, academics, students, and producers, constituting both method and objective for applied ethnomusicology. I identify the digital song (manifesting in multiple remixes) as flexible mediator, its potential remixes enhancing connectivity, forging harmoniously interacting transnational actor-networks via people, technology, and music. Such networks not only facilitate a better world, they embody it.

In this article, I explore the “Songs of the Saints: Tamil Traditions and New Creativities” collaborative music project that took place in 2016 between London-based Carnatic, or South Indian classical, musicians, two composers specialising in Indian and European music, and music students at Goldsmiths, University of London. The collaboration used the Tamil devotional song repertoire as a point of musical departure. As a song tradition widely sung in worship and in classical concerts yet little known outside the Tamil Hindu community, the project was intended to shed light on a rich cultural practice in London, to exchange musical knowledge and to create socio-musical connections between the university and a local music scene. Another aim of the project was to work with local community-based professional musicians who wished to reach out to audiences beyond the diasporic scene. In this article, I look at the process of collaborative musical performance in two examples from the project by examining the creative decision-making that took place, including selecting repertoire, processes of improvisation, rehearsal and translation, and processes of “dialogical editing” and “dialogism-in-action.” The project reveals some of the nuances and tensions inherent in intercultural music collaboration and dialogue, a sphere that is often simplistically depicted as harmonious and egalitarian. As a result of working across musical borders, the project generated musical, social and cultural knowledge, particularly when different forms of implicit knowledge and embodied practices came into tension with others and when traditional musical roles, authorities and conventions were challenged. This article critically analyses this intercultural music collaboration and dialogical collaborative project in order to understand the value of such short-term ventures in higher education settings.

This article examines the early stages of the development of an intercultural lullaby choir in Melbourne, Australia. The community choir emerged from an applied ethnomusicology collaboration between researchers from the Faculty of Fine Arts and Music, The University of Melbourne, and Victorian Cooperative on Children’s Services for Ethnic Groups (VICSEG) New Futures, a not-for-profit community organisation that provides training and support to newly arrived and recently settled migrant communities. The project’s shift from an open-ended exchange of personally meaningful lullabies to a formal ensemble will be interrogated, revealing how ethnomusicological research is defined by the relational dynamics and social arenas within which it is conducted. By way of ethnographic vignettes, this article outlines key stages of the project’s chronological development while also providing insight into participants’ experiences of the resulting musical encounters. Given this dual focus on process and outcome, ethnographic research findings are framed by theoretical work on intercultural contact zones and organised cultural encounters. Sites of intercultural encounter will be brought into view, highlighting how organisational decisions are experienced by participants in corporeal, temporal and affective ways. Like many applied ethnomusicology projects with intercultural objectives, by virtue of its institutionalisation the choir does not embody the transgressive and unexpected characteristics of sites of encounter. At the same time, the sensory embodiment of actively participating in intercultural music-making, learning and teaching manifest key components of “meaningful encounter.” In addition to exploring how participants‘ multiple social identities are constructed, legitimated and challenged in musical contact zones, this paper addresses the procedural, ethical and theoretical methodological implications that have arisen from the research.

This article describes the practical-theoretical process of composing two pieces inspired by the rhythmic and formal structures of thaqīl and mukhammas, the most obsolete compositional genres in contemporary Central Asian classical music. To gain a proper understanding of how the long metric cycles function in the genres mentioned, my colleague Farid Kheradmand, and I composed these pieces during our fieldwork in 2012 in Tajikistan under the supervision of the distinguished performer and scholar of Shashmaqām, Abduvali Abdurashidov, culminating in a performance of the compositions at the National Conservatory of Dushanbe.
The paper explores the activist motives behind this collaborative music-making project, highlighting two revivalist movements in Iranian and Tajik music cultures, both underpinned by academic-institutional discourses. Via this case study, I also demonstrate how apparently different methodological strands including music analysis, ethnographic fieldwork and participant observation may complement each other in a single piece of ethnomusicological research, yielding opportunities for music making across borders and intercultural exchange. An example of collaborative ethnography, the paper seeks to show the potential of academic dialogue between musicians from different classical music cultures to broaden the theoretical- practical horizons of participants.