This post builds on the themed issue Postcolonial Sound Archives, the world of music (new series) 10:1 (2021).

The article “Sounding out the Jaap Kunst Collection” in this themed issue engages with five wax cylinders (nrs 323–327) from the Jaap Kunst Sound Collection, presently located at the University of Amsterdam in the Netherlands. Existing meta-data suggest that the sounds on the cylinders may have been recorded on the Indonesian island Timor. The cylinders contain call-and-response incantations between a lead “caller” and a chorus. The final cylinder contains the protestant hymn “Heer, ik hoor van rijke zegen” / “Lord, I hear of showers of blessing,” ostensibly sung by the same group of voices in an unidentified language.

In my search for information about these sounds – a search that I outline in the article – I consulted a number of practitioners (protestant choral singers) and witnesses (Timorese scholars) of what turns out to be a natoni ritual from West Timor in classical Dawan language. Letters in Jaap Kunst’s correspondence (also kept at the University of Amsterdam) suggest that cylinders 323 to 327 were recorded by the Dutch pastor Pieter Middelkoop who lived as a missionary and cultural interlocutor between local communities and colonial agents in Timor from the 1920s to the 1950s. It seems that he fabricated, together with his religious assistant, P. Maboi, a protestant natoni ritual in Dawan language for missionary purposes. I propose that this protestant natoni fabrication has been recorded on cylinders 323 to 327 in the Jaap Kunst Sound Collection.

In my capacity as the curator of the Jaap Kunst Sound Collection at the University of Amsterdam, I have been thinking long and hard about whether and how to disclose this material. My ponderings resonate acutely with those in another article in the Postcolonial Sound Archives issue, entitled “The White Ethnomusicologist’s Burden: White Innocence and the Archive in Music Studies” by Eva-Maria Alexandra van Straaten. Am I entitled to publicize these incantations as heard and recorded by Maboi and Middelkoop? To put it mildly, I am not ideally positioned to do so. I am a white Dutch music scholar with a colonial family history in Indonesia and I have been endowed with curatorial powers over the material through institutionalized academic lines of transmission that directly grew out of imperial and colonial entitlements.

Yet, like Van Straaten, I am drawn between excitement and anxiety in dealing with this material. To a large extent, it is the excitement that makes me anxious. As Van Straaten compellingly demonstrates, it is the excitement that underlies White innocence, which may be one of the reasons why White scholars invest so much – both emotionally and rhetorically – in maintaining this White innocence (Van Straaten 2021:39). I also sense those investments in my own work, both in Indonesia and South Africa (Titus 2021; 2019). It is difficult to give up privileges. However, I also think that excitement does not necessarily amount to unreflective appropriation; it can also foster less invasive and less extractivist modes of relating, especially when the tension between excitement and anxiety is acknowledged and put to work productively. But again: being able to manage this tension constitutes another privilege in itself…

Such issues are central to a recently started research project coordinated by me and meLê yamomo, who is also the co-author of the article in this themed issue (yamomo & Titus 2021). This project is entitled Decolonizing Southeast Asian Sound Archives (DeCoSEAS) and will run for three years. It is funded by the Joint Programming Initiative on Cultural Heritage and Global Change (JPICH). Over the years, meLê’s and my thoughts have become entangled. From our partly overlapping, partly diverging positionalities in this entangled web of current and past relations, we can sometimes hear and feel the colonial legacies of our entanglements, both in our deep friendship and our intensive collaboration. What do we do with these legacies? Can we put them to work in our joint research of colonial sound archives?  Is it possible to explore the possibilities of new non-colonial relationships with this colonized archival material? Can sonic material – archived and constructed for imperial purposes – be re-appropriated and re-thought for the decolonization of our minds and hearts?

With these questions in mind I decided to disclose cylinders 323 to 327 here, even if we don’t know who is singing, where exactly and when, and even if we have not asked permission to disclose these sounds from their inheritors. This begs the poignant question who these inheritors are: Dawan-speaking Timorese communities who keep practicing natoni rituals, Dutch and Timorese protestant congregations who keep singing the hymn “Heer, ik hoor van rijke zegen”, direct descendants of the singers on these cylinders? Surely, all these communities partly overlap, but who are they? We have an idea of the identity of the recordist(s), but not of the recorded. Through disclosure new connections may be forged, new acknowledgements and credits could be paid, and re-appropriations may commence.

Below: Cylinders 323 to 326 contain a Timorese natoni ritual, as identified by Dr Dominggus Elcid Li from the Institute for Resource Governance and Social Change (IRGSC) in Kupang, Timor, who witnessed such rituals as they are carried out currently. We do not know yet for what occasion the natoni ritual on cylinders 323 tot 326 was carried out, although I expect this to be a protestant feast day. The score represents the Dutch version of the hymn “Lord, I hear of showers of blessing” /  “Heer, ik hoor van rijke zegen” that is sung on cylinder 327. The hymn was composed in the U.S. in 1862 by William Batchelder Bradbury (1816–1868) on a text by Elizabeth H. Codner (1823–1919). The version displayed in notation here is the Dutch translation of the English text by the Surinamese-Dutch poet Meier Salomon Bromet (1839–1905), that Middelkoop in all likelihood used for his own Dawan translation – the language he preached in. At present the hymn in Dutch translation features in basically all Dutch protestant hymn books, and is widely sung by protestant church choirs and congregations throughout the Netherlands. All cylinders digitized and introduced by Albrecht Wiedmann (Berlin Phonogramm-Archiv). 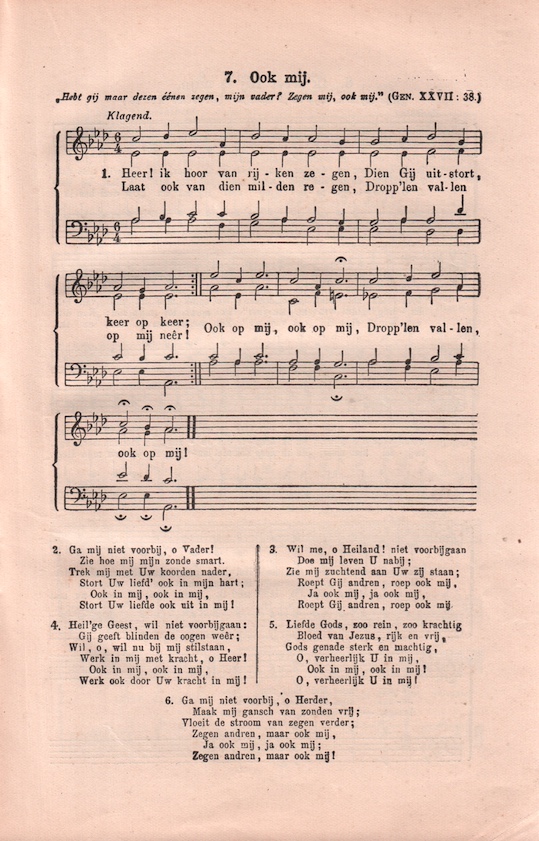 yamomo, meLê & Barbara Titus 2021. “The Persistent Refrain of the Colonial Archival Logic / Colonial Entanglements and Sonic Transgressions: Sounding Out the Jaap Kunst Collection” in the world of music (new series) 10(1), 39–72.