The Role of Women in Kurdish Cultural Heritage

Broadcasting the Nation: The Importance of Radio in Kurdish Music History

Kurdish Music?… Music from Dersim?…: Conflicting Identities and the Challenge of Categorization in Central-Eastern Anatolia 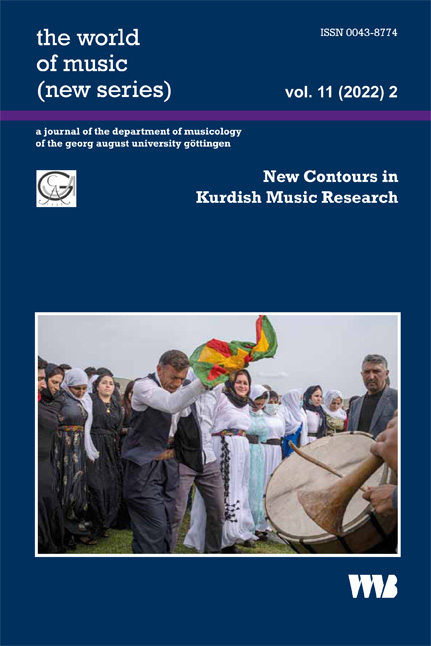 Today, self-identifying Kurds regard music-making—a vibrant, expanding domain of activity encompassing a wide array of genres and forms—as a prestigious vocation vital to their culture. Print, broadcast, and digital media embrace historical accounts of Kurdish music in which older generations of musical performers are invoked with an unambiguously laudatory tone that celebrates their national roles as agents in Kurdish culture. What is absent from such accounts as well as from the broader academic literature on Kurdish music, however, is an acknowledgment that until the mid-twentieth century, performing music generally carried a stigma which branded these practices as shameful and/or sinful. In fact, the main body of professional musicians hailed from local peripatetic lineages and were locally ascribed labels comparable to the pejorative and racialized term “gypsy.” The entrance of the dominant self-identifying Kurdish population into professional music-making is part of a gradual historical process, one where music, musicians, and music-making were incorporated into a new system of meanings and values, resulting in Kurds’ increased participation and the vibrant and diverse music scenes which exist today in Kurdistan and in the diaspora. By examining this process in the cultural area around Mardin, southeastern Turkey (Northern Kurdistan), this article aims to reveal how Kurdish professional musicians have navigated the stigma placed upon musical performance.

The Role of Women in Kurdish Cultural Heritage

This article—an intervention from an archivist and author who builds collections and museums to preserve and promote Kurdish culture and writes from outside of academia in the strictest sense—interrogates the frequently valorized and romanticized notion of Kurdish oral tradition as enshrined in the art of the dengbêj, revealing that on recordings and books and in popular imagination, male performers and male performance contexts have come to define this domain. The article argues that the contributions of women in creating and evolving the rich spectrum of orally transmitted genres, with their poetics, emotive force, and unique approaches to vocalization, is completely erased in the iconography of the male dengbêj. An understanding of the spaces of domestic seclusion and the vibrant role of a full range of language-based arts in household rhythms and the imparting of a worldview and historical consciousness supports the adoption of the term zarbêj (non-professional performer and purveyor of a spectrum oral genres) as an unsung counterweight to the dengbêj, who dominates public spaces from village gatherings to radio broadcasts and folklore collections.

Broadcasting the Nation: The Importance of Radio in Kurdish Music History

According to Stephen Blum and Amir Hassanpour (1996), radio broadcasting was the primary catalyst for the formation of a Kurdish “listening public” during the twentieth century. The importance of radio within Kurdish history reinforces recent claims within media studies (e.g. Hilmes and Loviglio 2002) regarding radio’s capacity to both form and inform the nation. How might we understand this role, however, in relation to the Kurds, who remain a stateless nation nearly a century after Kurdish hopes for national autonomy were crushed with the 1923 signing of the Treaty of Lausanne? In this article, which is based on both archival and ethnographic research conducted in Iraqi Kurdistan in 2017 and 2019, I reflect on the relationship between Kurdish radio broadcasting, which began in the 1930s, and the crystallization of a transnational Kurdish listening public formed in direct opposition to the national boundaries dividing it. I argue that, while inseparable from colonial and state power, broadcasting provided the means through which Kurds both responded to that power and began to articulate their own collective music history in defiance of colonial logics of place and time. As an important case study, I relate several key moments in the history of the Kurdish section of Radio Baghdad, which aired regular broadcasts in Kurdish from 1939 until shortly after the U.S.-led invasion of Iraq in 2003. In addition to providing career opportunities for transnational Kurdish musicians who are now seen as icons of Kurdish musical practice, Kurdish Radio Baghdad also prompted changes in the ways listeners defined the parameters of a distinctly Kurdish musical practice. By situating this particular history within the broader history of radio as a tool of resistance among Iraq’s Kurdish population, this article thereby contributes new insight into the relationships between resistance, sound technologies, and musical expression.

Since the beginning of the 1990s, a substantial portion of Kurdish and other Kurdish-speaking communities around the towns of Bozova and Hilvan, to the north of the city of Urfa, have been going back and forth between the city and the countryside as a regular part of their lives. The urban lifestyle and its economic and social rules have driven rural social ideals—which relate mostly to a tribal system of sociopolitical organizations known as eşîret/eşîr, based mostly on kinship—into a state of crisis, leading these new city dwellers to reorient the ways they interact to these new, urban spheres of influence. Nevertheless, community celebrations, such as weddings or post-circumcision parties, emerge as alternative spaces in which these tribal social discourses are revived through a type of communal dancing known as govend, which constitutes the prime event and activity at a wedding party. These various chain dances are mastered by every member of the community, involving not only choreographic material (movements and style) but also a set of meta-choreographic rules and parameters which govern the dance and allow social ideals regarding intra-communitarian relationships to come to the surface. Govend, having this commemorative power, engenders a deep bond between its practice and the members of the community, an attachment to which the intensity of dancing at wedding celebrations testifies. This article will describe how meta-choreographic rules—which represent the current reality of govend in this region alongside choreographic material—are shaped by the embodiment of the ways this community used to conceive their social interactions before the influence of urban lifestyles.

While Europe has long received attention as a vital site for Kurdish culture production-in-exile, cities in Turkey outside of Kurdistan (apart from Istanbul) are generally overlooked. Turkey’s Eastern Mediterranean seaboard, home to major ports and urban industrial centers like Mersin, Adana, İskenderun, and Osmaniye has attracted large-scale migration from largely Kurdish southeast Anatolia. Though known for its role in the life histories of the Kurdish writer Yaşar Kemal and the Alevi Kurdish singer Abdullah Papur, the region doesn’t typically figure into narratives of Kurdish musical culture. Rather it has a reputation for attracting internally displaced Kurds in large numbers, leading to intercommunal tensions and a politically liberal, multiethnic character. At present however, Mersin is one of the most vibrant capitals of Kurdish musical culture in Turkey. This article examines the prominent role Mersin-based musicians have played in evolving the aesthetics of contemporary wedding music and the active circuitry binding cities in Çukurova—Mersin, Adana, Tarsus, Dörtyol, Ceyhan, Osmaniye, İskenderun, and Antakya—to the Kurdish metropole of Amed/Diyarbakır (and neighboring Bismil) via a corridor that passes through Antep and Urfa. Against the urban backdrops of the cities themselves and the transformations that have shaped the region’s current demographic and cultural landscape, I probe some of the complexities of the repertoires evolved by these musicians through the demands of constant contact with Kurdish communities with differing regional origins and the respatialization of how Kurdish culture resounds across southern Anatolia.

Kurdish Music?… Music from Dersim?…: Conflicting Identities and the Challenge of Categorization in Central-Eastern Anatolia

In almost all international literature on music of the Middle East, the main categories are still either states or ethnic and/or religious groups (e.g., “music in Turkey,” “Turkish music,” “Kurdish music,” “Alevi music,” “Armenian music”). The population structure of the central portion of eastern Anatolia, however, is neither homogeneous nor historically stable. Among the numerous ethnic Sunni-Muslim, Alevi, and Christian groups, who variously speak Kurdish, Zaza, Turkish, and Circassian languages, exchange and migration has been constant, leading to a complex and dynamic population structure. A number of tribes have not only migrated over time, but subsets within them have even changed their language or denomination. Faced with all these cases, no consensus exists as to which identity discourses deserve more attention from musicologists. In the interest of musical analysis, further typological distinctions are vital to consider, for example socioeconomic structures and contexts, such as rural-mountainous versus urban environments. Since the twentieth century, mediatization, urbanization, and migration have led to an even growing multiplicity of social identities and musical styles, calling into question static, coherent narratives.

In this article, the contradictions and inadequacies of prevailing approaches will be emphasized through comparisons of music drawn from different social categories in central eastern Anatolia. Obviously, no unified musical tradition exists in the region, but rather a complex, uneven, and highly creative field of intensely localized and, recently, increasingly individual musical styles, influenced by numerous spheres of identity discourse. Looking only at musical features, however, the issue does not get easier. Not only a paucity of research but also methodological problems impede the comparison of the numerous traditions of singer-poets, laments, and religious poetic texts of different denominations. For the analysis of vocal styles for example, not only intonation and melodic structure have to be taken into account but also the performative dimensions of timbre, vocal intensity, the use of vibrato, dynamics, and the regulation of rhythm and tempo, all elements for whom satisfactory methods of representation and analysis have yet to be developed.